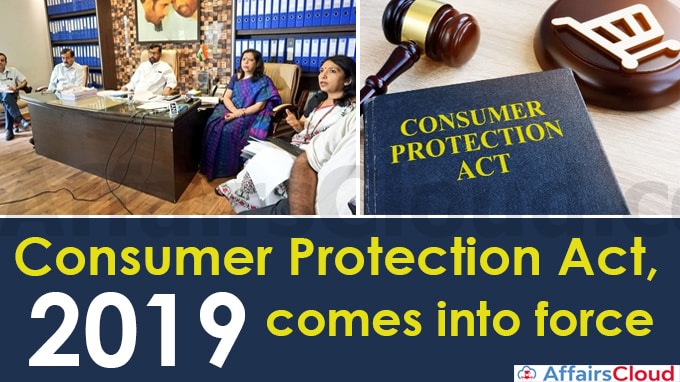 The Consumer Protection Act (CPA), 2019, which has replaced old Consumer Protection Act 1986 has came into force w.e.f. July 20, 2020 aiming to enforce and protect the rights of consumers, and provide an effective mechanism to address consumer grievances. The act was briefed by Union Minister for Consumer Affairs, Food & Public Distribution Ram Vilas Paswan through video conference with media.

A product manufacturer and seller will be liable to provide compensation for injury or damage caused by a defective product or service.

The Act proposes the establishment of a Central Consumer Protection Authority (CCPA) to promote, protect and enforce the rights of consumers, and make interventions in situations of unfair trade practices.

Every e-commerce entity is required to provide information relating to return, refund, exchange, warranty and guarantee, delivery and shipment, modes of payment, grievance redressal mechanism, payment methods, security of payment methods, charge-back options, etc. including country of origin which are necessary for enabling the consumer to make an informed decision at the pre-purchase stage on its platform.

The Act provides for a simplified dispute resolution mechanism, with a provision for mediation and e-filing of cases. The consumers are provided with a three-tier consumer dispute redressal machinery at the National (NCDRC), State (State Commissions) and District levels ( District Fora)

The Consumer Protection Bill, 2019 was introduced in the Upper House of Parliament by the Minister of Consumer Affairs, Food and Public Distribution, Ram Vilas Paswan, on July 8, 2019. It was passed by the Lok Sabha on July 30, 2019 and Rajya Sabha on August 6, 2019. The Bill was then signed into law by President Ram Nath Kovind on August 9, 2019.