On November 16, 2019,The Union Minister of Consumer Affairs, Food & Public Distribution Shri Ram Vilas Paswan has released BIS’s  (Bureau of Indian Standards) Water Quality Report 2019 for State Capitals & Delhi.
The test reports on samples of drinking water taken from 20 states across the country including Delhi.
Findings: Mumbai ranked number 1 in this report as all 10 samples comply with every standard. Hyderabad (Telangana) is at number two and it was followed by Bhubaneswar,Odisha (3rd ). Delhi’s water is the worst as all the 11samples drawn from various places did not comply with the requirements (19 out of 28 parameters failed). 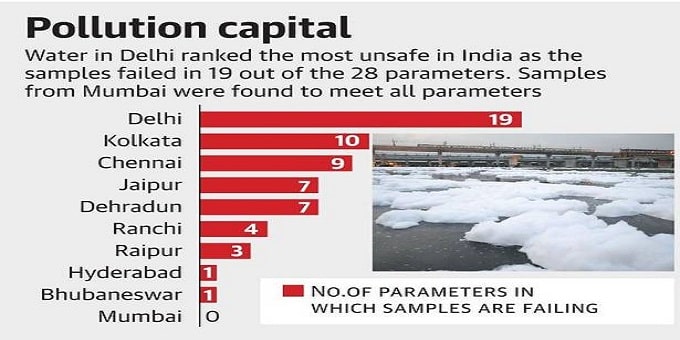 iii.By 2024, the central Governmnet has set a target to tap every house in the country and provide pure water under its flagship Jal Jeevan Mission. Under this, the purity of drinking water is being investigated in the cities covered under the 100 Smart Cities Scheme, including the capital of all the states of the country. All district headquarters are expected to be tested by August 15, 2020.
Here’s the list top 3& bottom cities in the report: