Commerce and Industry Minister, Mr Piyush Goyal led a high-power delegation to explore the opportunities for enhancing trade and investment from India to the Far East region of Russia at Vladivostok, Russia from August 11-13, 2019. His visit is a precursor to the upcoming visit of Prime Minister Narendra Modi for the 5th edition of the Eastern Economic Forum in September, 2019 where PM will be the guest of honour. 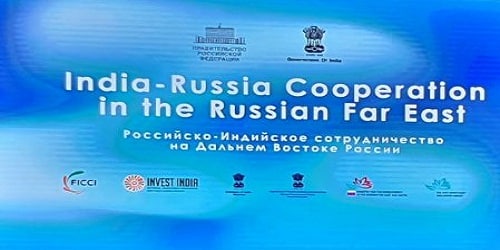 Agencies responsible
The event was the result of collaboration between Invest India and Federation of Indian Chambers of Commerce & Industry (FICCI) on the Indian side, and the Ministry for the Development of the Russian Far East and Arctic under the leadership of Alexander Kozlov and the Far East Investment and Export Promotion Agency on the Russian side.

Participants
i.Indian delegation: The delegation included the Chief Ministers of Goa (Pramod Sawant), Gujarat (Vijay Rupani), Haryana (Manohar Lal Khattar), and Uttar Pradesh (Yogi Adityanath) and an official from the State of Assam. The Chief Ministers of States were accompanied by business delegations who engaged with officials and businessmen from the provinces in Russia’s easternmost territory.
ii. Russian delegation: About 200 Russian companies, Investment Agencies and Funds took part from the Russian side.

Fields
The Indian delegation included more than 125 representatives from business stakeholders, who interacted with Russian counterparts on opportunities in the mining and processing of diamonds and other rare metals, railways, agriculture, fisheries and food processing, oil and gas, forestry and timber, coal and power, ceramics, tourism, ship building, technical education, healthcare, and pharma sectors and Ayurveda.

Achievement of Trade target of $30 billion by 2025
Russia’s Deputy Prime Minister, Yuri Trutnev and Commerce Minister of India Piyush Goyal underlined the need to diversify and deepen trade links in priority sectors, in order to meet the trade target of $30 billion by 2025. In 2018-19, the bilateral trade between the countries stood at $8.3 billion.

MoUs
i. The Memorandum of Understandings (MoUs) were signed in the areas of trade, economy, investment, scientific and technical cooperation by India & Russia.
ii. An MoU was signed between Amity University and Far East Federal University to enhance relations and develop academic and cultural exchange in the areas of education and research.
iii. An agreement was concluded on the establishment of the representative offices, the Centre for Yoga, and the Pushkin Centre for Russian Language and Cultural Studies.
iv. MoU on skill development was signed between National Skill Development Corporation (NSDC) and Far East Investment and Export Agency.

Invitations/ Addresses
i. Chief Minister of Haryana, Manohar Lal Khattar delivered his address in Russian language and invited Russian investors to Gurugram and Haryana. He addressed a session on oil and gas.
ii. Chief Minister of Goa, Dr. Pramod Sawant, extended an invitation to Russian businessmen to actively participate in the upcoming ‘Vibrant Goa Global Expo and Summit’. He talked about minerals, metals, rare-earths, and fisheries with the representatives of both countries.
iii. Chief Minister of Uttar Pradesh, Yogi Adityanath emphasized on collaboration in the field of agriculture, renewable energy and food-processing.
iv. Chief Minister of Gujarat, Vijay Rupani spoke in particular of the possibilities of collaboration in gold and diamond mining, and application of the latest technology for utilization of natural resources.

About Russia:
♦ Capital: Moscow
♦ Currency: Russian ruble
♦ Russia ranks first in the world for oil and natural gas production, exports of steel, primary aluminum and nitrogen fertilizers.
♦ It is the largest in terms of reserves of tin, zinc, titanium, niobium, nickel, iron ore, drinking water, natural gas, wood, diamonds and silver.
♦ It has the longest railways in the world- the Trans-Siberian Railway of 87,157 kilometers.