The Chief Minister gave away Abdul Kalam award, Kalpana Chawla Award, the Chief of the Good Governance Award, Award for doctors who serve people with disabilities, the award for the best social worker, young scientist award, the award for the best performing local bodies, that includes awards from 14 category during the 70th Independence Day celebrations after delivering her Special address at Fort St George in Chennai. 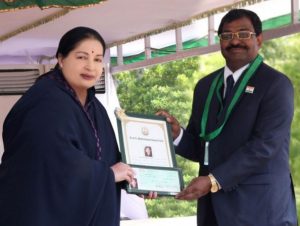 The Kalpana Chawla Award which is given for Courage and Daring Enterprise was bestowed to Jayanthi from Namakkal District. The award carries Rs 5 lakh cash, certificate and gold coated medal.