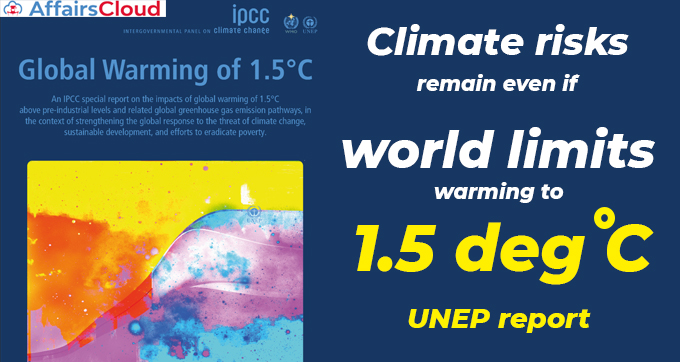 The report provides an update and accesses the global status and progress of the adaptation across three parameters viz. planning, financing, and implementation.

Current Scenario as per report:

i.The report states that if the world limits warming to 1.5°C, many climate risks remain and will be irreversible.

ii.It also warned that the gap between costs of adaptation and the current financial flow is widening.

i.Currently the warming level is at 1.1°C which resulted in climate-related devastation in 2021 ranging from floods in Europe and China, heatwaves in Pacific NorthWest, wildfires in Greece and floods and monsoon variabilities in India.

iii.Climate finance flowing to developing countries for mitigation and adaptation planning and implementation reached $79.6 billion in 2019.

iv.Globally, $16.7 trillion of finance has been deployed, but only a small portion of this funding has targeted adaptation

v.Notably, the Paris Agreement requires all its signatories to plan and implement adaptation measures through national adaptation plans, studies, and monitoring of climate change effects.

The report called for urgent efforts to increase the financing and implementation of actions designed to adapt to the growing impacts of climate change and prioritise green economic growth.

The World Meteorological Organization (WMO) released a report on the latest climate science information named ‘United in Science 2021’. As per the report, the COVID-19 caused only a temporary decline in carbon dioxide (CO2) emissions in 2020. Whereas the concentrations of major greenhouse gases – CO2, methane (CH4) and nitrous oxide (N2O)  in the atmosphere continued to increase in 2020 and the first half of 2021.