Cristiano Ronaldo has been named Uefa’s Best Player in Europe for the second time after winning the Champions League and Euro 2016. It is noted that the Real Madrid forward beat team-mate Gareth Bale and Atletico Madrid striker Antoine Griezmann were in the voting.

The UEFA Best Player in Europe Award is an association football award given to the footballer playing for a football club in Europe that is considered the best in the previous season.

Cristiano Ronaldo dos Santos Aveiro is a Portuguese professionalfootballer who plays for Spanish club Real Madrid and the Portugal national team. He is a forward and serves as captain for Portugal. 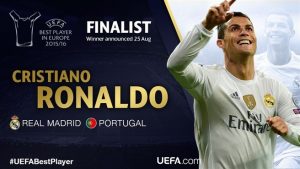