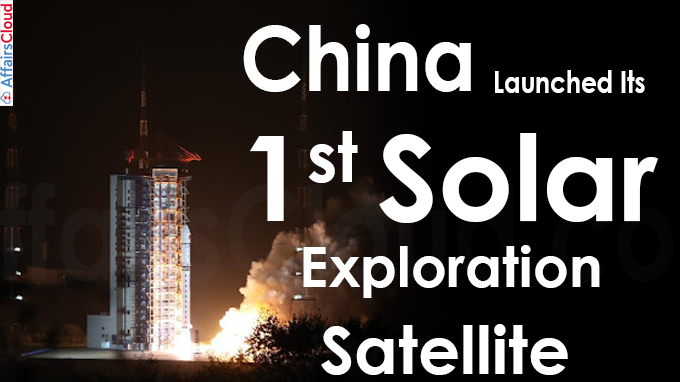 China has successfully launched its 1st solar exploration satellite into space from the Taiyuan Satellite Launch Center in northern Shanxi Province aboard a Long March-2D rocket.The satellite was named as ‘Xihe’(Xihe is the goddess of the sun who created the calendar in ancient Chinese mythology), also known as the Chinese Hα Solar Explorer (CHASE).

i.TheAditya-L1 mission is led by the ISRO (Indian Space Research Organisation) with an aim to set up a space-based observatory to track the sun. The mission is expected to be launched in 2022.

ii.It will provide observations of the Sun’s Corona (the outer atmosphere of the Sun), Chromosphere (UV) and photosphere (broadband filters).

China launched a 3-astronauts crew for a 6-month mission aboard its space station. The launch is planned to set a new record for the length of time spent in space (i.e. the longest orbit) by Chinese astronauts.

i.The new crew consists of Pilot ZhaiZhigang, Wang Yaping (the only woman on the mission), and Ye Guangfu. China is moving towards completing the orbiting structure.

ii.In 2020, China landed its Tianwen-1, its 1st fully homegrown Mars Mission, which was launched by Long March 5 Rocket, along with its accompanying Zhurong rover for exploring the evidence of life on Mars.

iii.Following the Soviet Union and the United State, China became the 3rd country (in October 2003) to put a person in space on its own rocket.