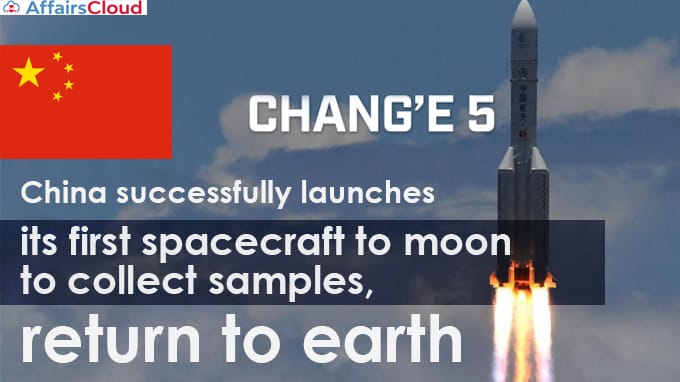 On November 24, 2020, China National Space Administration (CNSA) has successfully launched the 8.2 tonne lunar probe namely “Chang’e-5” through Long March-5, China’s largest carrier rocket. The launch took place from the Wenchang Spacecraft Launch Site in the southern province of Hainan, China. Its task is to bring 2kgs of sample soil and rock of moon to earth in a mission of around 23 days.

The mission aims to promote China’s science and technology development and lay an important foundation for China’s future manned lunar landing and deep space exploration. The aim of the programme is for China to acquire the basic technologies of unmanned lunar exploration with limited investment.

The landing site of Chang’e-5 will be near Mons Rumker, a volcanic mound in the Oceanus Procellarum (Ocean of Storms) located in the northwest region of the moon. It is on the near side of the moon. While the orbiter-returner orbits about 200 km above the lunar surface.

–The mission is named,’Chang’e-5′ after the ancient Chinese goddess of the moon.

–The spacecraft “Chang’e-5” consists of four parts: an orbiter, a returner, an ascender and a lander. It’s the lander who will drill and scoop samples from the surface and store them in a protective capsule.

Through this mission the China will realize have the following firsts in its history:

i.On October 27, 2020, For the first time, National Aeronautics and Space Administration’s (NASA) Stratospheric Observatory for Infrared Astronomy (SOFIA) has confirmed water on the sunlit surface of the Moon. SOFIA has detected water molecules (H2O) in Clavius Crater, one of the largest craters visible from Earth, located in the Moon’s southern hemisphere.

ii.The NASA has chosen ‘India Sat’, an indigenous experimental satellite developed by 3 students from Tamil Nadu namely, M. Adnaan of Thanthonrimalai, M. Kesavan of Nagampalli and V. Arun of Thennilai for launch in suborbital space in June, next on NASA’s sounding rocket 7.