A key panel on GST(Goods and Services Tax) headed by the chief economic advisor Arvind Subramanian submitted its suggestions to the government. Chief economic advisor suggested a revenue-neutral rate 17-18 per cent GST rate and dropping of the one per cent additional tax on inter-state sales. 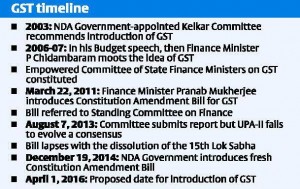 Revenue-neutral rate: To preserve current revenues that is at which there will be no loss to both state and central governments.

GST(Goods and Services Tax): Uniform indirect tax on manufacture, sale and consumption of goods and services throughout India, to replace taxes levied by the Central and State governments.