After the Expansion & Reshuffling of Cabinet, Prime Minister Narendra Modi held the first high-level meeting with the new Union Cabinet. During the meeting, the cabinet granted approval to new initiatives.

11th Extension of Term of Commission

The cabinet approved the 11th Extension of term of the Commission constituted under Article 340 by 6 months beyond 31st July 2021 and up to 31st January 2022.

ii.Operationalisation of Gram Nyayalayas in implementing states with an expenditure of INR50 crores.

The scheme will increase the availability of well-equipped Court Halls and Residential Accommodations for the Judiciary. It will help in improving the overall functioning and performance of the Judiciary.

i.The CSS for development of infrastructure facilities for Judiciary was introduced in 1993-94. From 2014-2021, the government has sanctioned INR 5200 crores for the scheme.

ii.The Gram Nyayalayas Act, 2008 was enacted for the establishment of Gram Nyayalayas for speedy and easy access to the justice system in the rural areas of India. An Amount of INR 81.53 crore has been sanctioned for the scheme since its inception in 2009.

The cabinet has approved the increase of Dearness Allowance (DA) to Central Government employees and Dearness Relief (DR) to Pensions to 28%, which is an increase of 11% compared to existing rate of 17% of the Basic Pay/Pension.

The Union Cabinet has approved an INR 1624 crore subsidy scheme for a period of 5 years to Indian shipping companies in global tenders floated by Ministries & Central Public Sector Enterprises (CPSEs) for import of Government Cargo.

The rate at which subsidy support is extended for the 2 categories of ships will be reduced by 1% every year till it falls to 10% & 5% respectively.

i.The Indian fleet comprises only 1.2% of the world fleet in terms of capacity.

ii.Improvement in AYUSH education by enhancing the number of well-equipped AYUSH Educational institutions.

Change of Nomenclature & Mandate of NEIFM

The cabinet has approved the continuation of the Rebate of State and Central Taxes and Levies (RoSCTL) on exports of Apparel/Garment and Made-ups with the same rates as notified by the Ministry of Textiles. It has been extended till 31st March 2024.

RoSCTL was notified by the Ministry of Textiles in 2019. Under the scheme, exporters are issued Duty Credit Scrip for the value of embedded taxes and levies contained in the exported product.

The Cabinet Committee on Economic Affairs (CCEA) approved the implementation of the Livestock sector package worth INR 54,618 crore.

As per the Package, the schemes of the Department will be merged into 3 broad categories as

Rashtriya Gokul Mission will help in development and conservation of indigenous breeds and will contribute in improving the economic condition of the rural poor. 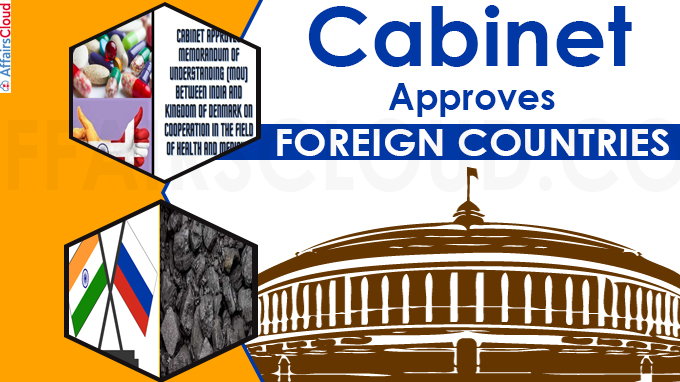 The cabinet has approved the MoU between the Ministry of Steel, India & Ministry of Energy, Russia on cooperation regarding coking coal, which is used for Steel making.

i.Objective – To Strengthen cooperation between India & Russia in the steel sector.

About Ministry of Steel