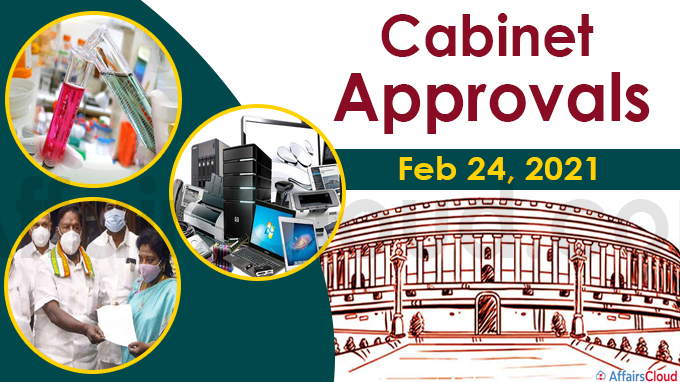 The Union Cabinet approved the Production Linked Incentive (PLI) Scheme with an outlay of Rs 15,000 crore for the pharmaceuticals and with Rs 7,350 crore for IT (Information Technology) hardware.

Projection: Production of high-value products and increase in exports

This PLI scheme will promote innovation for development of complex and high-tech products including products for emerging therapies and in-vitro diagnostic devices thereby reducing dependency on imports.

The pharmaceutical PLI scheme was announced under three categories. The Indian pharmaceutical industry is the third-largest globally in terms of the volume term of production and is worth $40 billion in value term. The country contributes 3.5% of total drugs and medicines exported globally.

PLI scheme for IT Hardware:

The Cabinet also approved the PLI Scheme for IT hardware such as laptops, tablets, all-in-one PCs and servers.  Under this, incentive will be given on net incremental sales of goods manufactured in India for a period of four years.

What is Production-Linked Incentive (PLI) scheme?

Production–Linked Incentive (PLI) scheme was introduced by the government to incentivise and boost domestic manufacturing, as well as attract foreign manufacturers to move base to India. The aim of the scheme is to generate more employment and cut down the country’s reliance on imports from other countries.

PLI scheme was announced for 13 sectors. In order to boost manufacturing in India, the finance minister also announced a production linked incentive (PLI) scheme with an outlay of Rs 1.97 lakh crore for 5 years starting this fiscal in the Union Budget 2021-22.

The Union Cabinet also approved the proposal of the Home Ministry to dissolve the Puducherry Assembly and impose President’s rule in the Union Territory. This decision has been taken as no party claimed to form a government following the resignation of the Chief Minister, Velu Narayanasamy.

What is a President’s rule?

It is a suspension of state government and imposition of direct Union government rule in a state. It is imposed under Article 356 of the Constitution of India. No major government decisions can be made and no projects can be sanctioned till the time the President’s rule is revoked and the next government is formed.

i.Union Cabinet approved Production Linked Incentive (PLI) scheme worth up to Rs 1.46 lakh crore for 10 key sector. This decision has been taken to attract investments, boost manufacturing and enhance exports on the lines of the Atmanirbhar Bharat.

ii.On October 29, 2020,Department of Pharmaceuticals, Ministry of Chemicals and Fertilizers has revised guidelines of the PLI schemes for promotion of domestic manufacturing of bulk drugs and medical devices.Replacement of Criteria of ‘Minimum threshold’ investment with ‘Committed Investment’ by the selected applicant.