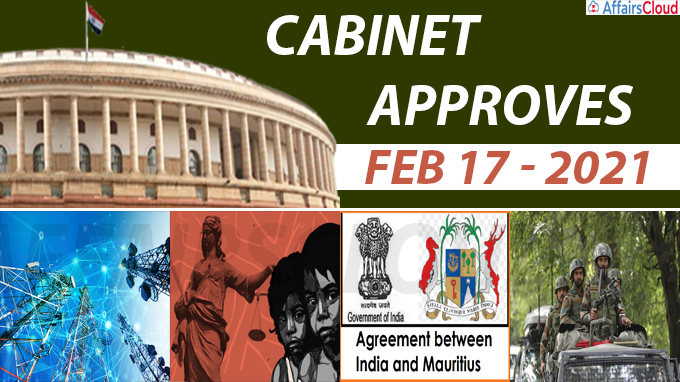 On February 17, 2021, the Union Cabinet Chaired by Prime Minister Narendra has gave its approval to the following proposals:

Cabinet approves Amendments to the Juvenile Justice (Care and Protection of Children) Act, 2015

The Union Cabinet has approved the proposal of Ministry of Women and Child Development (MoWCD) to make amendments in the Juvenile Justice (Care and Protection of Children) Act, 2015 or JJ Act by introducing measures for the strengthening of Child Protection. These mainly include empowerment of District Magistrate.

–As per the Government data, in 2018, there were 629 adoption cases pending in various courts. In order to ensure speedy disposal of these cases, the amendment has authorized District Magistrate (DM) including Additional District Magistrate to issue adoption orders under Section 61 of the JJ Act.

–The amendments also included background and educational qualification checks of a person who wants to join as a member of child welfare committees (CWC). Currently there is no specific direction for the same.

— The definition of “child in need of care and protection” is expanded as child victims of trafficking, drug abuse and those abandoned by their guardians area also included in under the amended law

The Union Cabinet also approved enhanced delegation of Financial Powers under Capital Procurement to levels below Vice-Chief of Armed Forces for items of Capital nature such as overhauls, refits, upgrades etc.

The Cabinet has also approved enhanced financial powers in the Make-I category under which Government funding up to 70% of the prototype development cost.

CECPA encourage and improve trade between the two countries.

Under CECPA, Indian service providers will have access to around 115 sub-sectors from the 11 broad service sectors. While India has offered around 95 sub-sectors from the 11 broad services sectors, including professional services, R&D, other business services, telecommunication, financial, distribution, higher education, environmental, health, tourism and travel related services, recreational services and transport services.

ii.The Union Cabinet also approved Memorandum of Understanding (MoU) between Indian Government and Royal Government of Bhutan on Cooperation in the peaceful users of outer space which was signed on November 19, 2020 by both sides at Bangalore/Thimpu.