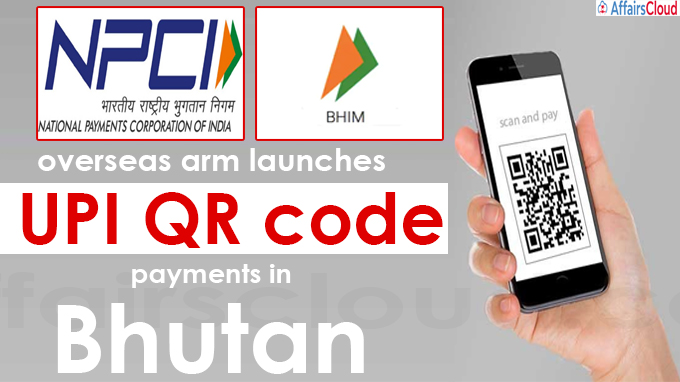 i.The collaboration will lead to financial integration between the two economies and it will enable acceptance of UPI powered BHIM App in Bhutan.

ii.The participation of NPCI mobile application through UPI QR transactions will be accepted at all RMA acquired merchants in Bhutan.

iii.The launch will benefit more than 200,000 tourists from India, who are travelling to Bhutan every year.

Note – The launch is the 3rd phase of the project on the Cross-border QR Code Payment linkage between India and Bhutan Rupay and it was also the continuation of the announcements made in the launch of RuPay in Bhutan in 2019.

UPI is an instant payment system developed by NPCI, UPI is built over the Immediate Payment Service (IMPS) infrastructure and allows the users to instantly transfer money between any two parties’ bank accounts without revealing details of one’s bank account to the other party.

i.It is a UPI based payment interface app that is used to make real-time fund transfers using a single identity such as a Mobile number or Virtual Payment Address (UPI ID).

ii.Currently BHIM is available in 20 languages and it could also be used to make recurring payments such as mobile bills, electricity bills, OTT subscriptions, insurance, mutual funds, etc.

On May 02, 2021, Satin Creditcare Network Limited (SCNL), a Microfinance Institute(MFI) and HSBC India, banking partner of SCNL made a partnership with NPCI to integrate NPCI’s UPI AutoPay platform into its system, to enable fully automated loan Recurring Payments by its customers.

NPCI has onboarded PayCore, Turkey’s global payment solutions company as one of the certified partners for ‘RuPay SoftPOS’ to drive cashless payments across the country.

It is the central bank of Bhutan that was established under the Royal Monetary Authority of Bhutan Act of 1982.

It is a wholly-owned subsidiary of NPCI, devoted to the deployment of NPCI’s indigenous, Real-Time Payment System – UPI and Card Scheme – RuPay, outside India.
Establishment – April 3, 2020
CEO – Ritesh Shukla