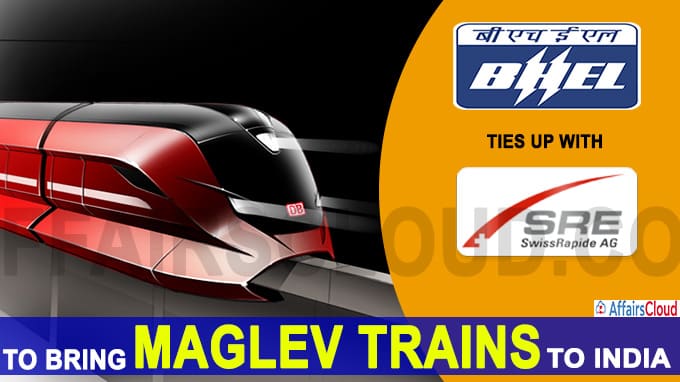 i.The agreement has been signed in the backdrop of Government of India’s initiatives of ‘Make in India’ & ‘Aatmanirbhar Bharat’.

ii.The MoU will enable the Indigenous manufacturing of the State-of-the-art Maglev Trains.

iii.The MoU will set the foundation for cooperation and exploration of mutually beneficial business opportunities.

iv.The MoU aims to utilise the capabilities, skills, knowledge and assets of both companies for the development of Maglev Train Projects in India.

v.SwissRapide AG is a swiss company, which is the only established and commercially proven ultra-high-speed Maglev Rail System in the world.

i.The Maglev system drifts in the air instead of rolling due to magnetic levitation. The vehicle will have no physical contact with the guideway.

iii.It is considered the most advanced innovation in railway technology in the last 50 years.

i.BHEL has been a reliable partner in the growth of Indian Railways by supplying electric, diesel locomotives, EMU (Electrical Multiple Unit), propulsion system sets and drives.

ii.Kolkata Metro, which is the first metro in India is equipped with a BHEL made propulsion system.

ii.On July 17, 2020, Railway Board Chairman Vinod Kumar Yadav announced the connectivity of all capitals of North-Eastern (NE) states through rail network by 2023.