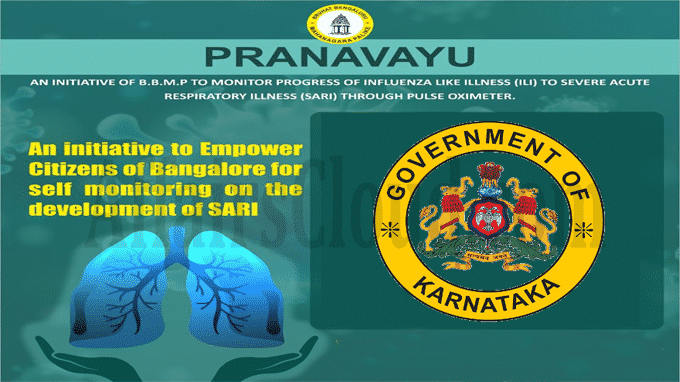 The Bruhat Bengaluru Mahanagara Palike (BBMP), Bengaluru, Karnataka, has launched an initiative called “Pranavayu” as many COVID-19 patients have low oxygen levels that put them at risk of complications. This initiative helps each individual to monitor blood oxygen levels and heart rates of patients showing influenza-like illnesses (ILI) in fever clinics.

ii.About Pranavayu: Through this initiative, the BBMP doctors at Fever Clinics will monitor patients using an oximeter. A pulse oximeter is a small device or probe that can be clipped onto a finger for the reading of blood oxygen level and heart rate.

iii.With Oximeter, it is possible to detect respiratory distress well in advance and start treatment to mitigate the distress, even possibly the use of ventilators. Those who have flu-like symptoms can monitor the oxygen saturation every three-four hours.

iv.If the level drops below 90, the patient may be taken to the hospital for clinical intervention.

v.When restrictions are relieved, there may be a spike in cases of ILI. If citizens can buy the oximeter and monitor the oxygen saturation levels, it allows for early clinical intervention.

vi.The BBMP also stated that the cause for concern in COVID-19 is not simple, by which the infection in the upper respiratory tract resolves on its own in nearly 85% cases.

vii.In case the progress of the disease to SARI (15-20%) where the lung functionality is impaired to an extent that patients need external support to sustain respiration.

viii.About BBMP: The Bruhat Bengaluru Mahanagara Palike (BBMP), is the administrative body responsible for civic amenities and some infrastructural assets of the Greater Bangalore metropolitan area. It is the fourth largest Municipal Corporation in India.

ix.The BBMP represents the third level of government (the Central Government and State Government being the first two levels). BBMP is run by a city council composed of elected representatives called “corporators”, one from each of the wards (localities) of the city.