On April 15, 2020 The Indian Council of Medical Research (ICMR) in a 1st of its study in collaboration with a team of scientists from the National Institute of Virology (NIV), Pune, have found the presence of different kind of ‘Bat coronavirus’ (BtCoV) from 25 bats in 2 Indian bat species namely, Pteropus (Indian Flying Fox) and Rousettus (old world fruit bats). 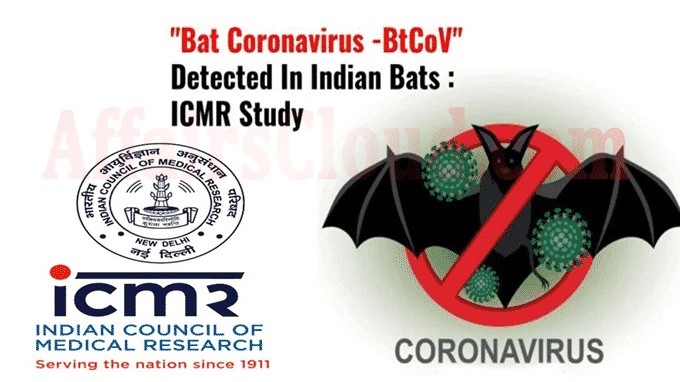 ii.The sample study is based on the samples collected from the forests of 2 species in Kerala, Karnataka, Tamil Nadu, Himachal Pradesh, Punjab, Gujarat, Odisha, Telangana, Chandigarh and Puducherry. The Pteropus bat species were earlier found positive for Nipah virus in 2018 and 2019 in Kerala.

iii.The findings are part of a larger study carried out by researchers to study the presence of Bt-CoV.

iv.Severe Acute Respiratory Syndrome Coronavirus 2 (SARS-CoV-2) is also suspected to be associated with bats, stated the study, with the objective, ‘Detection of coronaviruses in Pteropus and Rousettus species of bats from different states of India’ .

v.Bats are considered to be the natural reservoir for many viruses, of which some are potential human pathogens, identifications of such causative agents will provide leads for the development of diagnostic along with preparedness and readiness to deal with such emergent viruses

vi.The detection and identification of those viruses from bats suggest cross-sectional antibody surveys (human and domestic animals) in localities where the viruses have been detected.

vii.The study also stated that the CoVs in the subfamily Coronavirinae do not usually produce clinical symptoms in bats but if there is an accidental transmission of these viruses to humans and other animals may result in respiratory, enteric, hepatic or neurologic diseases of variable severity & still it is not understood as to why only certain CoVs can infect people.