A base year is the year used for comparison for the level of a particular economic index. The arbitrary level of 100 is selected so that percentage changes (either rising or falling) can be easily depicted.

*BASE YEAR also know as rebasing

why base year changes _

*By every 10 years there is change  will be minimum 4% rise in price of items so base year has to be changed .

How can we calculate base year

now it has been changed now in 2015 — the IT ,economy ,infra ,e-commerce are contributed more to base year need change

The change in base year__

The govt of india will also coincide with other surveys that act as inputs in assigning weights in the National Income Accounts. In 2011-12, the five-yearly survey on employment and consumer expenditure will be repeated. They were carried out in 2009-10, but since bad monsoons would have affected employment and income growth, the surveys will need to be done again. The change in the base year of the GDP series is considered to be very important, as the other two major data series, IIP and WPI, are also expected to be changed to the same base year. This is a step in the right direction.

Economists say high inflation in the current year could mean lower inflation figures in future while the present spell of slowdown could mean higher growth rates later. Till now, 2011-12 has been a choppy year with a slowdown in growth and high inflation.

government, engineering an economic rebound with a slew of reforms, on Friday unveiled a new statistical method to calculate the national income with a broader framework that turned up a pleasant surprise: GDP in the past year 2013-14 grew 6.9% instead of the earlier 4.7%. 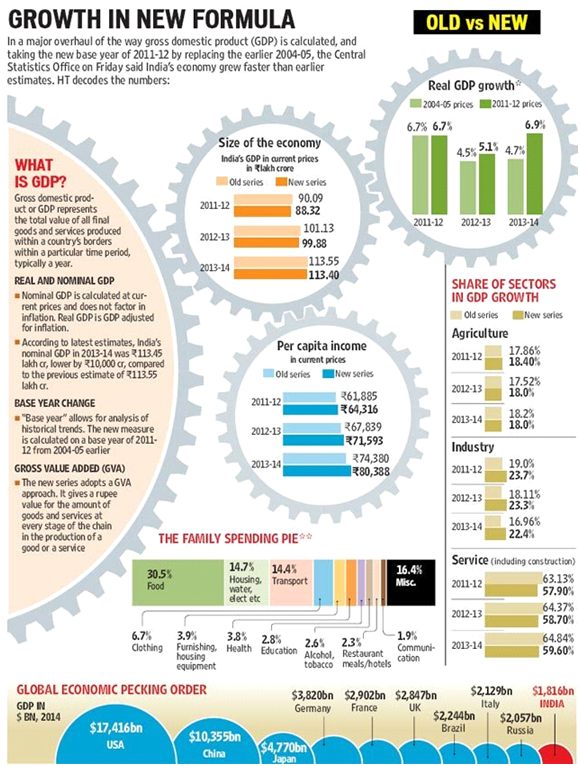 BASE YEARS OF LATEST INDEX__

GDP_ Gross Domestic Product, is the measure of a country’s economic growth.

1.GDP is typically measured by reference to the shape of the economy in a “base year”. Statisticians sample businesses in different industries to see how fast they are growing. The weight they give to each sector depends on its importance to the economy in the base year. However, as time passes the base year become less and less accurate due to the emergence of new sectors which drives the country’s economy, and which are not represented in the previously decided base year. Thus, countries changes their base years once they think that it has become irrelevant. This process of changing the base year for calculating GDP is commonly known has rebasing

2.The change in the base year and also the conceptual framework, the release said, will improve ease of understanding (data) for analysis and facilitate international compatibility.

The new series, it said, will also affect a wide range of indicators like trends in public expenditure, taxes and public sector debt that are conventionally analysed in terms of their ratios to nominal GDP. However, the release said, the level of revision in the present base revision “is not large enough to affect any of these ratios significantly.