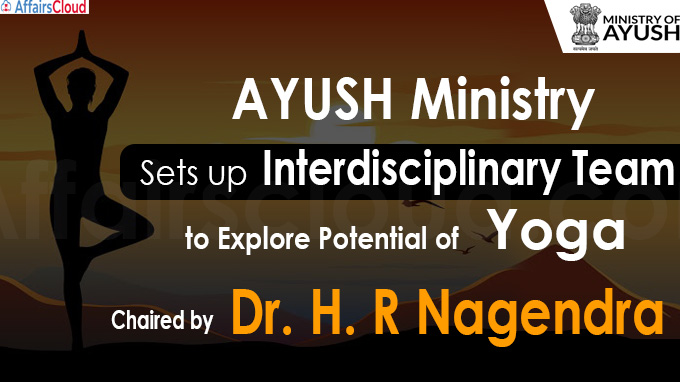 The ministry of AYUSH has set up an interdisciplinary team of experts to explore the potential of Yoga as a productivity enhancing tool for the population. The Committee is Chaired by HR Nagendra, Chancellor of Swami Vivekananda Yoga Anusandhana Samsthana.

i.The expert committee will submit the preliminary recommendation by May 2021.

ii.The committee recognised the global surge in the popularity of yoga in the past 5 years.

iii.According to the committee, the productivity dimension of yoga, its role in the workplace and its benefits to employees to perform better are unexplored at a larger extent.

iv.The committee will systematically identify the various directions of the productivity dimension and develop protocols along with the directions.

v.The committee will adopt a science and evidence based approach in finalising recommendations.

vi.National Productivity Council, New Delhi is also supporting the study. Various institutions from the private and public sector are also associated for the study.

Importance of Yoga in Productivity:

With the increasing physical and mental pressures on the employees due to the COVID-19 pandemic, the productivity dimension of yoga became an important aspect of the growth aspirations of India.

The Ministry of AYUSH (Ayurveda, Yoga and Naturopathy, Unani, Siddha and Homeopathy) and Invest India will collaborate to set up a strategic policy unit called “Strategic Policy & Facilitation Bureau (SPFB)” to facilitate planned and systematic growth of Ayush Sector means SPFB Bureau will support the AYUSH ministry in strategic and policy making initiatives.