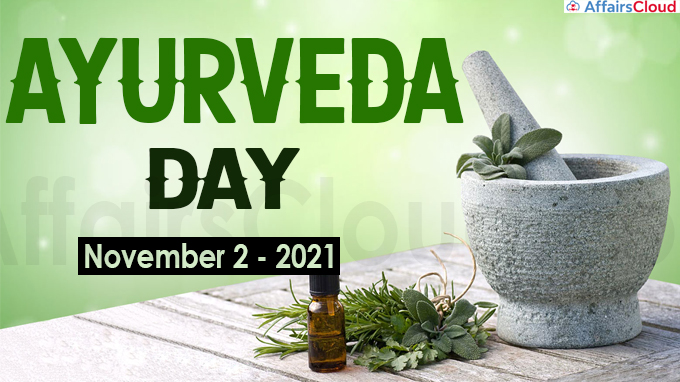 Ayurveda Day is observed annually across the globe on Dhanwantri Jayanthi or Dhanteras, the festival of Dhanvantari, the Hindu god of Ayurveda to create awareness about the significance of Ayurveda and to promote Ayurvedic principles of healing in society.

The day aims to promote and preserve the health science of Ayurveda in line with the United Nations(UN)’s Sustainable Development Goal(SDG) 3: to ensure healthy lives and promote wellbeing for all at all ages.

i.Ayurveda Day, a global initiative by the Center for Public Diplomacy and Soft Power of India Foundation.

ii.The global initiative is supported by The Ministry of Ayurveda, Yoga and Naturopathy, Unani, Siddha and Homoeopathy (AYUSH), the Government of India and the Indian Council for Cultural Relations (ICCR).

The National Institute of Ayurveda(NIA), Jaipur, Rajasthan is hosting a 2-day event as a part of the commemoration of the 6th Ayurveda day, to encourage the Ayurvedic principles of wellness and healing in alignment with the theme, ‘Ayurveda for Poshan’.

i.Ayurveda Swasthya Samiksha, a handbook containing daily routines and Ayurveda for Poshan, a booklet was released during the event.

iii.Additionally, a special manuscript website portal was launched along with short videos, Central Council for Research in Ayurvedic Sciences (CCRAS) publications and films.

About The Ministry of Ayurveda, Yoga and Naturopathy, Unani, Siddha and Homoeopathy (AYUSH):