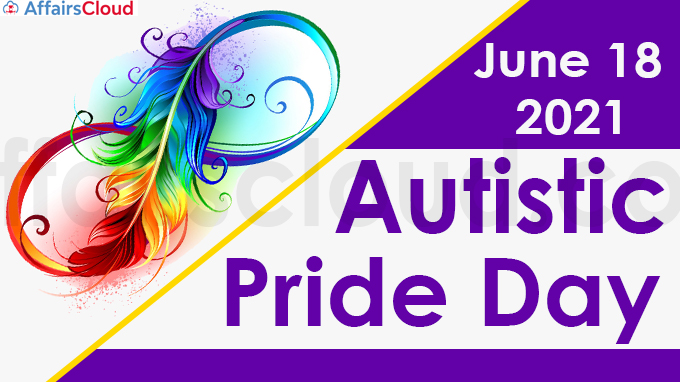 The Autistic Pride Day is annually observed across the globe on 18th June to create awareness about Autism and to provide space for people with autism to celebrate their neurodiversity and difference.

The day recognises the importance of pride for people with autism and highlights the unique individuals and not cases for treatment.

The “rainbow infinity” is the symbol of Autistic Pride Day which represents diversity with infinite variations and infinite possibilities.

i.Autistic Pride Day was initiated by the Aspies For Freedom (AFF), an autism activist group that remains controversial within the autism community.

ii.The first Autistic Pride Day was observed in 2005 in Brazil by the AFF created by Gareth and Amy Nelson and later became a global event.

ii.Autism differs from person to person in severity and combinations of symptoms and the characteristics of ASD are classified into two categories,

In 2004, the World Health Assembly(WHA) adopted the resolution “Comprehensive and coordinated efforts for the management of Autism Spectrum Disorders(ASD)” for the member nations to collaborate with the World Health Organisation(WHO) to strengthen the national capacities to address ASD and other developmental disorders.