Australian Prime Minister, Malcolm Turnbull was on an official visit to India from 9th-12th April, 2017. This was Turnbull’s first visit to India after he assumed office in September 2015. 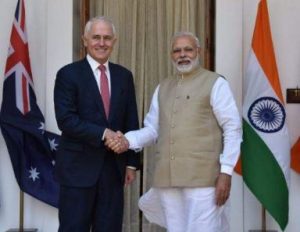 Implementation arrangement on Cooperation in Earth Observation and Satellite Navigation

Out of the above MoUs, the one on counter-terrorism signed between Home Ministries of both countries holds special significance, owing to the recent developments in Asia-Pacific Region.

On April 12, 2017, Vijay Goel – Union Minister for Youth Affairs and Australian Prime Minister Malcolm Turnbull launched Sports Partnership in Mumbai with an aim to increase cooperation in sports among India and Australia. Legendary Cricketer, Sachin Tendulkar was also present at the occasion.

Under this partnership, India and Australia will cooperate in following four areas:

Moreover, Two Australian Universities – Victoria University and University of Canberra will assist India to setup a National Sports University, similar to the Australian Institute of Sport.