On April 26, 2020 The premier multilateral air combat training Exercise Pitch Black 2020 scheduled from July 27 to August 14 is cancelled by Australia due to the current and anticipated impacts of the worldwide pandemic of COVID-19. The next edition is scheduled in 2022. 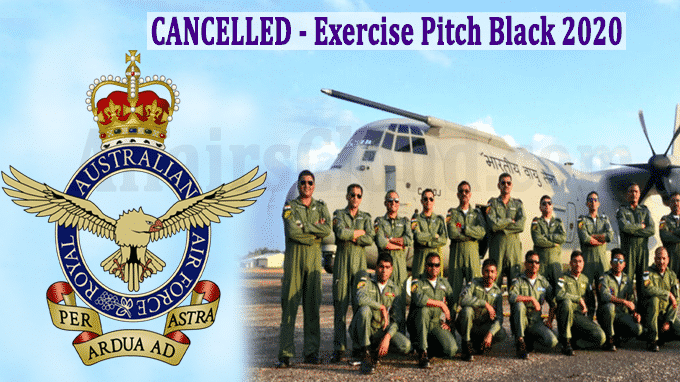 i.It is a biennial three week multinational large force employment exercise conducted primarily from RAAF Base Darwin and RAAF Base Tindal. RAAF Base Amberley was to  be included in the exercise this year

ii.It is an international enhancement activity with forces participating from a wide range of regional, coalition and allied nations developing and enhancing military relationships at all levels.

iv.It provides an opportunity to test and improve the force integration, by utilising one of the largest training airspace areas in the world- Bradshaw Field Training Area and Delamere Air Weapons Range.

v.The exercise hosts up to 3500 personnel and up to 120 aircraft from around the globe, Japan was to take part for the first time.

India’s Participation
In its last edition in 2018, IAF for the 1st time participated with its contingent consisting of 145 personnel, four Su-30MKI fighters, one C-130 and one C-17 transport aircraft which went to Australia via Indonesia and during the transit had constructive engagements with Indonesian and Malaysian Air Forces as well

India’s relation with Australia in defence

i.The defence and strategic engagement with Australia has steadily gone up in recent years particularly on the bilateral front with naval cooperation at the forefront.

iii.The Mutual Logistics Support Agreement (MLSA) is long pending & is expected to be concluded soon as well as a broader maritime cooperation agreement including the Maritime Domain Awareness (MDA) to elevate the existing strategic partnership.