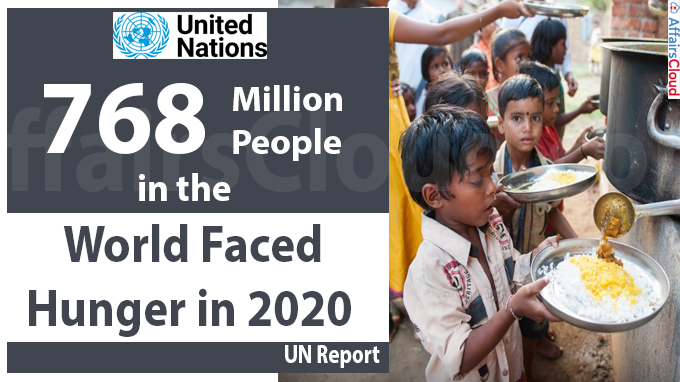 According to ‘The State of Food Security and Nutrition in the World – 2021’ released by 5 Agencies of UN, Between 720-811 million people (768 million being the midpoint of project range) in the world faced hunger in 2020.That is, 118 million more people were facing hunger in 2020 than in 2019.It is the 1st comprehensive report on food insecurity and nutrition in the Post-Pandemic era.

State of Food Security and Nutrition in the World

It is an annual flagship report jointly prepared by FAO, IFAD, UNICEF, WFP and WHO which provides the progress made towards ending hunger, achieving food security, improving nutrition and achieving the goal of the 2030 Sustainable Development Goals.

iv.Based on the current trends, the UN Sustainable Development Goal of Zero Hunger by 2030 will be missed by a margin of nearly 660 million people.