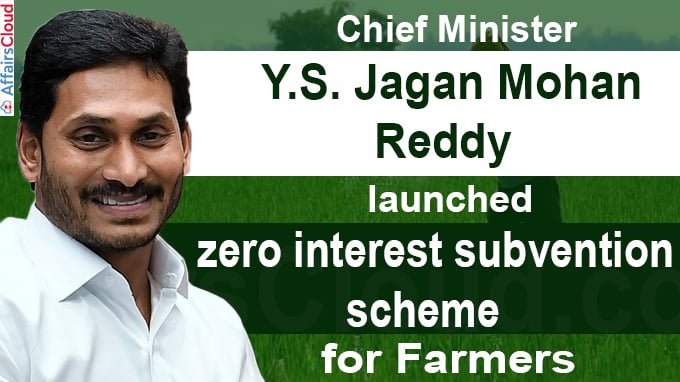 The government of AP has provided a financial assistance of Rs.65000 crore to the farmers under various schemes.

i.Under this scheme, Rs.128.47 crore was directly credited into the bank account of around 6.27 lakh farmers who had availed a crop loan of upto Rs. 1 lakh during the 2019-2020 rabi season and repaid the amount within the stipulated time.

ii.To avail the interest subvention from June 2021, the farmers has to enroll on the e-crop database.

Additional info:
i.The state government is also providing an input subsidy to the farmers to cover the losses in the same crop season and has credited Rs.1055 crore to the farmers.

ii.The government has also established a market intervention fund with Rs.3000 crore and providing a minimum support price for crops to help the farmers.

On 15th December, 2020, Andhra Pradesh (AP) Chief Minister (CM) Jaganmohan Reddy launched ‘YSR Free Crop Insurance Scheme’ for farmers who have lost their crops during Kharif 2019. An amount of INR 1, 252 Crores was directly credited into the bank account of around 9.48 Lakh farmers.