French Ambassador to India Franço is Richier conferred the Knight of the Legion of Honour on Anand Mahindra, at his France residence to Mahindra & Mahindra Group, in recognition of his outstanding national and international achievements and initiatives. 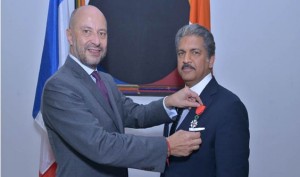 Knight of the Legion of Honour: