Union Home Minister Amit Shah chaired the 2-day (8th & 9th September , 2019) event of 68th Plenary session of the North Eastern Council 2019 (NEC, a nodal agency for the economic and social development of the North East which consists of 8 states of the region) at the Assam Administrative Staff College in Guwahati, Assam. 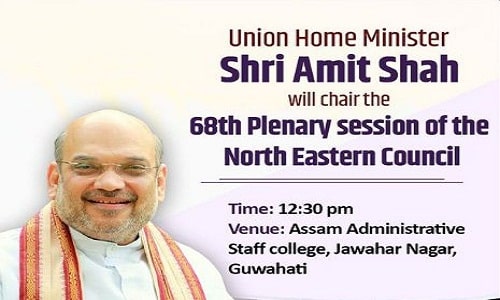 Key points:
i. Governors and Chief Ministers of 8 northeastern states (Assam, Arunachal Pradesh, Manipur, Tripura, Mizoram, Meghalaya, Nagaland, and Sikkim) participated in the event.
ii. Shah reviewed the ongoing development projects in the Northeast. He stressed on preparing a roadmap to enhance the rich culture and heritage of the North East region. He also affirmed that the central government will not touch Article 371 which grants special provisions to the North East.
Apart from this, he reviewed the development of the northeastern states.
iii. Minister of Development of North Eastern Region (DoNER) Dr. Jitendra Singh attended the event, where he stated that NEC has been given its highest budgetary outlay of 1476 crore rupees for the year 2019-20 aimed at the development of North East.
iv. The second day of the Plenary meet will witness presentations by various Chief Secretaries of the NEC member states. Secretaries of 13 Central ministries will also discuss interventions by their respective Ministries in development works of the region.
v. This North East visit of Shah is considered very important as after the final list of  National Citizenship Register (NRC) was published in Assam on August 2019, in which 19 lakh people lost their names.

About NEC
It is set up under North Eastern Council Act, 1972.
Composition: It is chaired by Union Home Minister. Minister of Development of North East Region (DoNER) is its Vice-Chairman. Governors and Chief Ministers of all the 8 North Eastern States are its members.