A deficit is when there is excess of expenditures over revenue for a given time period.

The three deficits related to budget are: Revenue Deficit, Fiscal Deficit and Primary Deficit. Fourth one is Current Account Deficit.
Read about the terms going to to be used in this article from here. 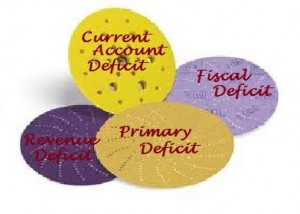