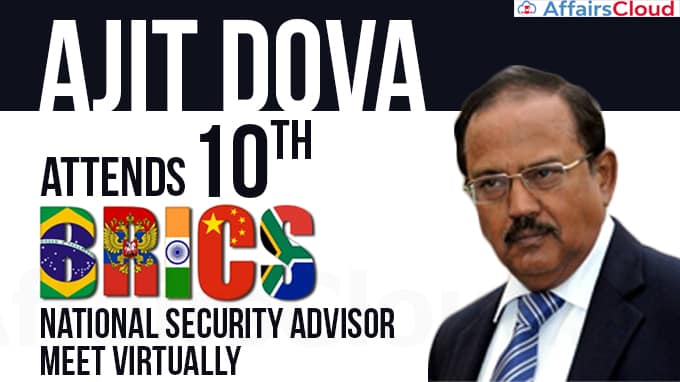 On September 17, 2020, the 10th meeting of BRICS (Brazil, Russia, India, China and South Africa) National Security Advisors (NSAs) was hosted by Russia, the current chair of BRICS, where India was represented by Ajit Doval, Adviser to the Prime Minister (PM) of India on National Security. The focus of the meet was to exchange views on combating terrorism and extremism.

-During the meet an agreement was reached on further expanding the dialogue on security issues, organized crime, drug trafficking and providing for closer coordination among law enforcement agencies of the member nations.

-It was proposed to create new mechanisms of interaction in the field of countering epidemiological threats and to conduct expert consultations on biosafety in the BRICS format.

-The sides also expressed concern about the escalation of tensions around Iran, Venezuela and Syria.

–The five countries agreed to work on deepening coordination at key international organisations and forums, especially the UN.

-BRICS represent over 3.6 billion people, or half of the world population, and they have a combined GDP of $16.6 trillion.

-This is the fourth time in September 2020 that top Indian and Chinese leaders have been part of multilateral meetings hosted by Russia, following a virtual meeting of Brics’ foreign ministers, and meetings of the defence and foreign ministers of the Shanghai Cooperation Organisation (SCO) in Moscow, Russia.

–India, Russia and China are members of BRICS, SCO and RIC and act as platform for mutual trust building and cooperation. Russia is chair of 2020 BRICS and SCO.