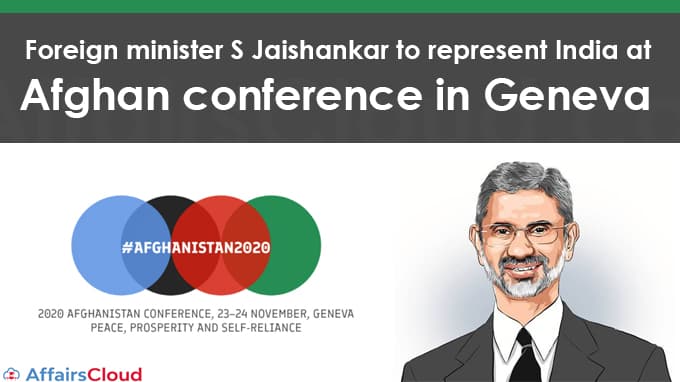 On November 23-24, 2020, the ministerial pledging conference namely “2020 Afghanistan Conference” was co-hosted by the United Nations (UN), the Government of the Islamic Republic of Afghanistan, and the Government of Finland. It was held over Video teleconferencing (VTC) amid COVID-19 while the technical arrangements and translation were observed from Palace of Nations (Palais des Nations), home of the UN headquarter office at Geneva, Switzerland.

Participants: Around 70 countries and 32 international organisations along with Afghan Government officials and civil society representatives.

Aim of Conference: To reaffirm the commitment of the international community towards the Afghanistan government to determine shared development objectives for 2021-24.

i.The donors pledged at least US$ 3.3 billion for the first year of the upcoming quadrennial, with annual commitments expected to stay at the same level year-on-year.

ii.International partners welcomed the second version of the Afghanistan National Peace and Development Framework which provides the Afghan government’s vision, strategy and plan for the next five years (2021-25).

iii.Afghanistan and the international community have entered a new phase of cooperation, as articulated in the Afghanistan Partnership Framework, marked by conditionality and enhanced joint review mechanisms to ensure results and impact for the people of Afghanistan.

During the conference, India emphasized it’s long term commitment for the development of Afghanistan through reconstruction and rehabilitation. As a part of this, India announced the Phase-IV of High Impact Community Development Projects (HICDP) in Afghanistan worth USD 80 million (Rs 592 crore), which envisages more than 100 projects.

Notably, India’s funding for Afghanistan has reached over USD 3 billion (Rs 22,200 crore) so far. Already India has undertaken 400 plus projects in all 34 of Afghanistan’s provinces. The key ones are as follows:

The European Union (EU) also pledged $1.2 billion for Afghanistan in the next four years.

i.On 14th October, 2020 the Government of India contributed USD 1 Million (Approximately INR 7.3 Crores) to the United Nations Relief and Works Agency in Near East (UNRWA) for Palestine refugees. It will help in improving the lives of Palestine refugees suffering due to the pandemic.

ii. On October 6, 2020 Najeeb Tarakai, Afghanistan cricketer passed away at the age of 29 due to a road accident. The top-order right-handed batsman has played 12 T20Is (Twenty20 Internationals) and 1 ODI (One Day International) for Afghanistan.