Technical definition of Adjusted Net Bank Credit (ANBC) is: It is the net bank credit plus investments made by banks in non-SLR bonds held in the held-to-maturity category or credit equivalent amount of off-balance-sheet exposure, whichever is higher. 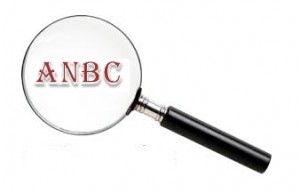 In simple terms, ANBC is the net banking credit after taking into account bill discounting, non-SLR securities and other exemption via long-term bonds.

Now what is net bank credit and what are non-SLR bonds? These will be discussed later below.

First let us see, how this ANBC is calculated. The following table provides the calculations involved in getting ANBC of a bank:

1) Bank Credit
Bank Credit of a bank is the loans, cash payments, overdrafts provided by the bank to customers. It also contains the bills purchased and bills discounted.
Bills purchased are the bills which have been purchased as a security for the advances given. For example: ABC Company goes to bank for taking a loan. Now it has to provide any security against that loan, so that bank can recover the money if company is not able to pay the money back in stipulated time. Instead of keeping any asset as security, it gives a bill to the bank saying that it will give the amount of money plus interest after a stipulated time. So in this way the bank has purchased a bill against giving the amount written in bill to the company.
Bills discounted are the bills which are purchased after discounting money. For example: A person buys a product from the market, and promises to pay the money at some later time. The shopkeeper will give a bill to the customer. Now if the shopkeeper wants the money before that time, he can go to bank with the bill. Now bank will not give the entire money written on the bill to the shopkeeper, but it will deduct some money (known as bill discounting) from the bill and lent the remaining to the shopkeeper. Now when the shopkeeper receives the money from his customer, he can pay back to bank. The bank deducts the money or discounts the bill in order to keep the discounted money with it as interest.

4) Investments in Non-SLR categories under HTM (Held To Maturity) category + other investments eligible to be treated as priority sector.
We know that banks have to maintain their deposits in liquid assets with itself before granting credits or loans to customers in order to meet the future contingencies. The liquid assets are such as government securities, bonds and precious metals like gold are the assets which can be converted to cash any time. And the ratio of prescribed liquid investments to deposits is termed as Statutory Liquidity Ratio (SLR).
Now other than the SLR investments, investing in various capital market instruments such as stocks and bonds issued by public and private sector companies and commercial papers, investment in mutual fund schemes, etc. come under the Non-SLR investments.
Held To Maturity means the investments which remain for a specified time period i.e. till the maturity and also the investments which have fixed or determinable payments.

Bonds/debentures in Non-SLR categories under HTM(Held to maturity) category+ other investments eligible to be treated as priority sector + Outstanding Deposits under RIDF and other eligible funds with NABARD, NHB, SIDBI and MUDRA Ltd on account of priority sector shortfall + outstanding PSLCs (Priority Sector Lending Certificates).