Hello readers, this is a very important post for upcoming exams. We have collaborated all information of this year’s Union Budget 2020-2021 in a simplified way from official government websites. We urge you to read each and every point of the second budget of Narendra Modi led National Democratic Alliance (NDA) government’s second term. 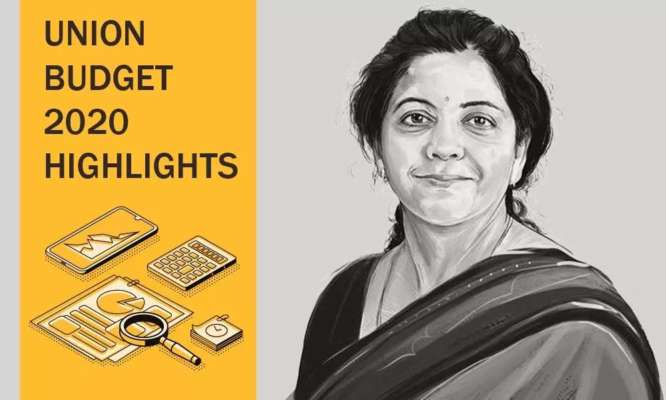 On February 1, 2020, Union Finance Minister Nirmala Sitharaman presented her second and 90th Union Budget of India for 2020-2021 (2020 Ke Lie Bharata Ka Keṃdriya Bajaṭa) in Parliament with an address to the speaker of Lok Sabha Om Birla, citing nominal GDP growth rate of 10% (i.e., real growth plus inflation) in 2020-21, which was 12% for 2019-20. The fiscal deficit target for the coming fiscal year starting April 1, has been fixed at 3.5 per cent. The aim of this budget is to boost incomes and enhance purchasing power. 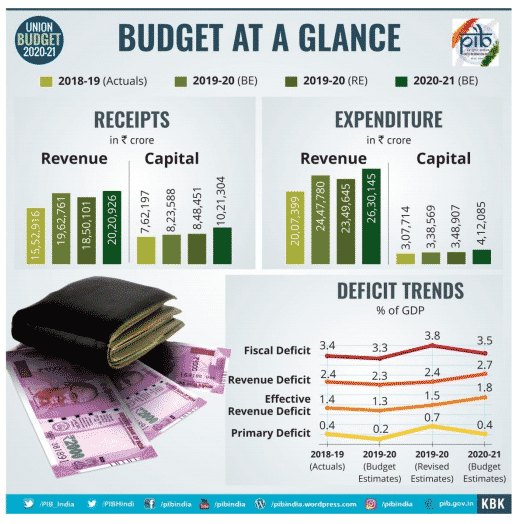 Before presenting the budget Sitharaman had recited a small verse in Kashmiri by Pandit Dinanath Koul. In English the verse means “Everything that we do, all of us do, is for this beautiful country”.

Point to be noted: Nirmala Sitharaman broke her own record and delivered the longest Union Budget speech by a Finance Minister of India i.e. 159 minutes long. Her first budget speech (2019-20) was 137 minutes long. She is also the only second woman to present the budget after Indira Gandhi presented in 1970-71. But she is the first full-time woman Finance Minister to present the Union Budget. Indira Gandhi held the additional charge of Finance when she was the Prime Minister.

Before heading towards the complete highlights of Union Budget let’s take a look on the documents that are presented to the Parliament, besides the Finance Minister’s Budget Speech. They are as follows:

The Union budget 2020-2021 was presented on the basis of the following 3 prominent themes and dedicated to provide “Ease of Living” to all citizens.

1- Aspirational India – better standards of living with access to health, education and better jobs for all sections of the society.

The 16 points are as follows:

3. Pradhan Mantri Kisan Urja Suraksha Utthan Mahabhiyan Scheme (PM KUSUM) will be expanded: Funds would be provided to 20 lakh farmers for setting up stand alone solar pumps while another 15 lakh farmers will be funded to set up grid-connected 15 lakh solar pumps. PM KUSUM scheme had unveiled in Feb 2019 with an outlay of Rs. 34,422 crore to add a solar capacity of 25,750 MW by 2022.

4. Balanced use of all kinds of fertilizers including the traditional organic and other innovative fertilizers.

5. Establishment of warehousing– On the lines with Warehouse Development and Regulatory Authority (WDRA) norms, govt will provide Viability Gap Funding for setting up efficient warehouses at the block/taluk level on a Public Private Partnership (PPP) mode. Food Corporation of India (FCI) and Central Warehousing Corporation (CWC) shall undertake such warehouse building on their land too.

6. Village Storage Scheme– Govt will launch a ‘Village Storage Scheme’ to be run by women’s self-help groups (SHGs), with an aim to provide holding capacity for farmers. Apart from this, women belonging rural areas can will be able to retain their status as “Dhaanya Lakshmi”.

7. Setting up of “Kisan Rail”– To make the transportation of perishable goods (milk, meat, fish, etc) fast,  Indian Railways will set up Kisan Rail through Public Private Partnership (PPP). There shall be refrigerated coaches in Express and Freight trains as well.

11. Integration of e-NWR with e-NAM– Financing on Negotiable Warehousing Receipts (e-NWR) has crossed more than`6000 crore. This will be integrated with e-National Agricultural Market (eNAM).

12. Expansion of  NABARD re-finance scheme– Proposal to expand the NABARD refinance scheme has been given to cover Non-Banking Financial Company (NBFCs) and cooperatives that are active in agriculture lending. All eligible beneficiaries of the PM-Kisan scheme—that provides small and marginal farmers a minimum income support of up to Rs 6,000 crore—will also be eligible for the Kisan Credit Card scheme.

13. Elimination of  foot and mouth disease by 2025– A goal has been set to eliminate foot and mouth disease, as well as brucellosis in cattle, peste des petits ruminants (PPR) in sheep and goats by 2025. Coverage of artificial insemination shall be increased from resent 30% to 70%. Also, Mahatma Gandhi National Rural Employment Guarantee Act (MNREGS) would be dovetailed to develop fodder farms.

14. Blue Economy: Our government proposes to put in place a framework for development, management and conservation of marine fishery resources.

16. Under Deen Dayal Antyodaya Yojana for alleviation of poverty, 58 lakh SHGs have been mobilised.

-Strengthening of “TB Harega Desh Jeetega” to end Tuberculosis by 2025.

-Expansion of Jan Aushadhi Kendra Scheme to all districts offering 2000 medicines and 300 surgicals by 2024.

It is divided in Industry and Commerce, Infrastructure, and Energy

3 – Caring Society – Both humane and compassionate.

It focuses on Women & Child, Social Welfare; Culture and Tourism and also on Environment and Climate Change

Allocation towards development and welfare of Scheduled tribes: Rs 53,700 crore

Parameters for the incentives would be notified by the Ministry of Environment, Forests and Climate change. Allocation for this purpose is Rs 4400 crore for 2020-21.

This overarching theme is drived by Clean, corruption-free, policy driven, good in intent and most importantly trusting in faith.

It is comprised of Banking, Insurance, Financial Market and Infra Finance

– An eligible Start-up having turnover up to 25 crores is allowed deduction of 100% of its profits for three consecutive assessment years out of seven years if the total turnover does not exceed 25 crore rupees.
– It has been proposed to increase the turnover limit from existing Rs 25 crore to Rs 100 crores.
– Apart from this, the period of eligibility for claim of deduction has also been extended from the existing 7 years to 10 years.

– Refund process has been simplified and has been made fully automated with no human interface.
– Dynamic QR-code capturing GST parameters proposed for consumer invoices

Now, last but not the least, here is the static information about Union Budget of India.

Under the Article 112 of the Constitution of India, Union Budget is also known as Annual financial statement. The budget is presented by means of the Financial bill and Appropriation bill which has to be passed by the houses. 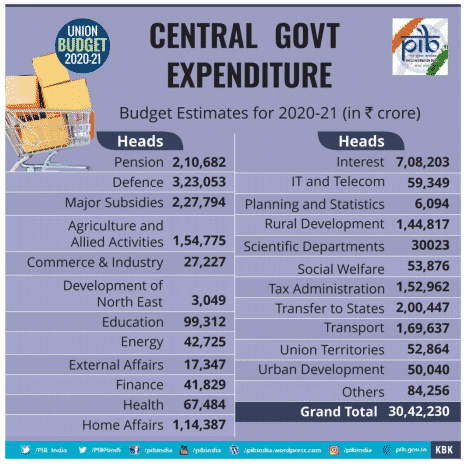 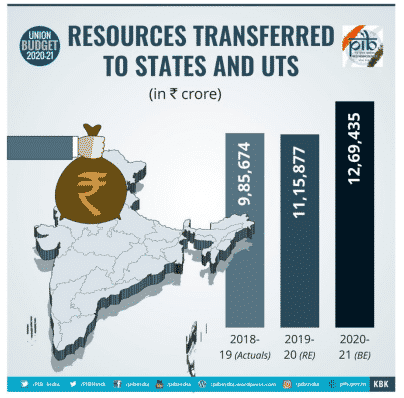 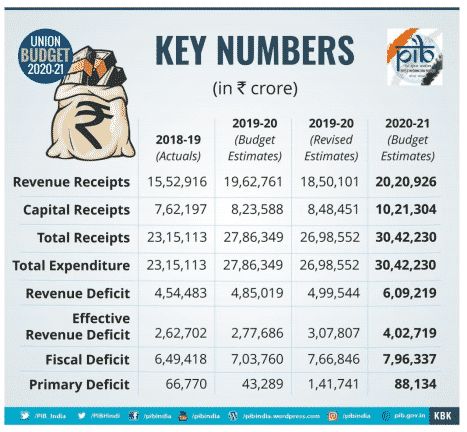 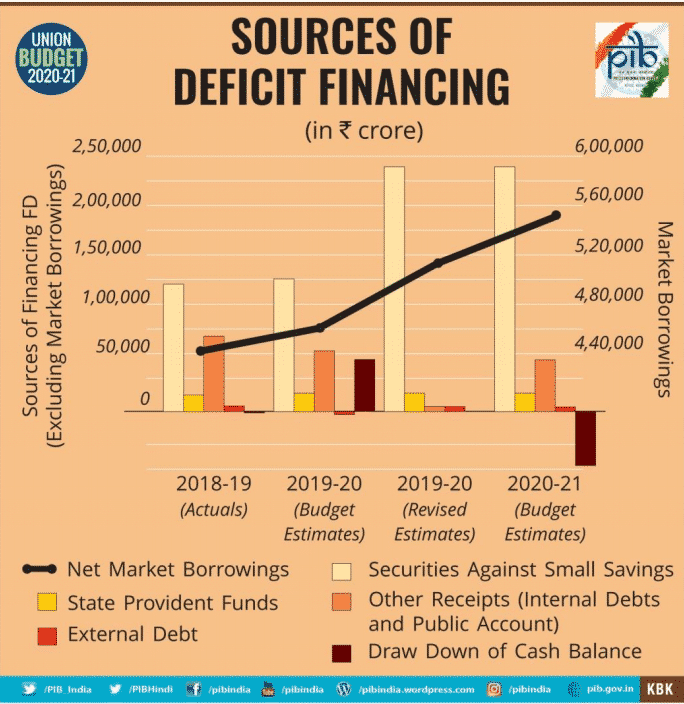 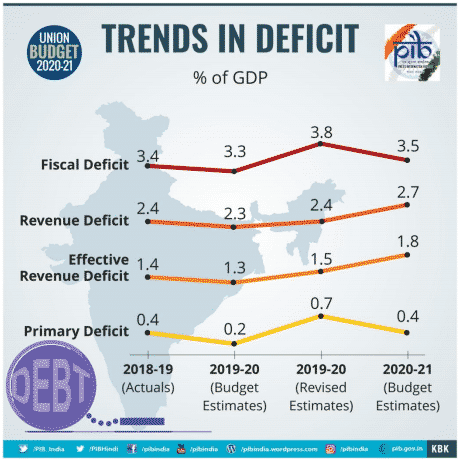 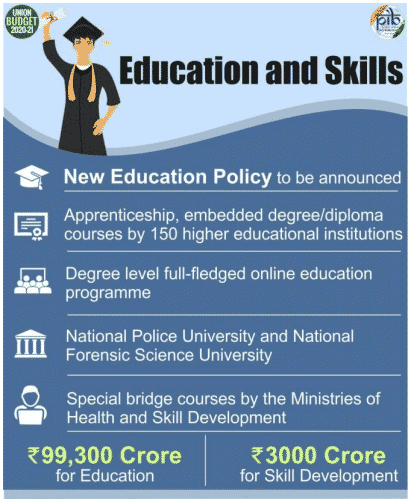 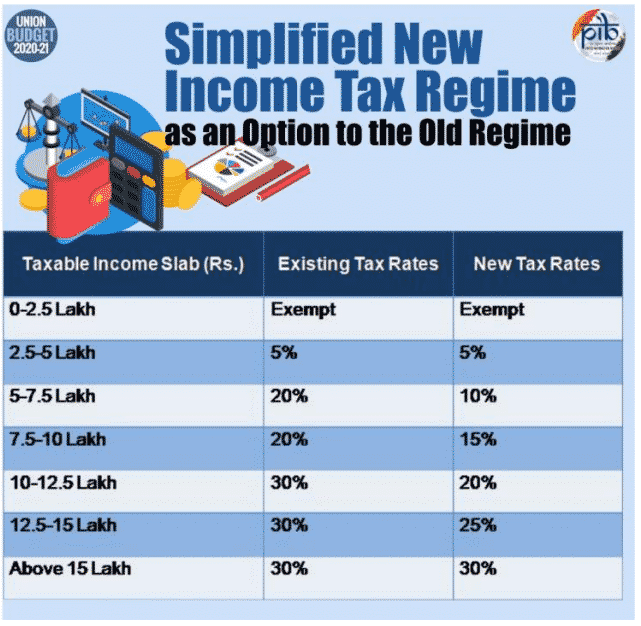 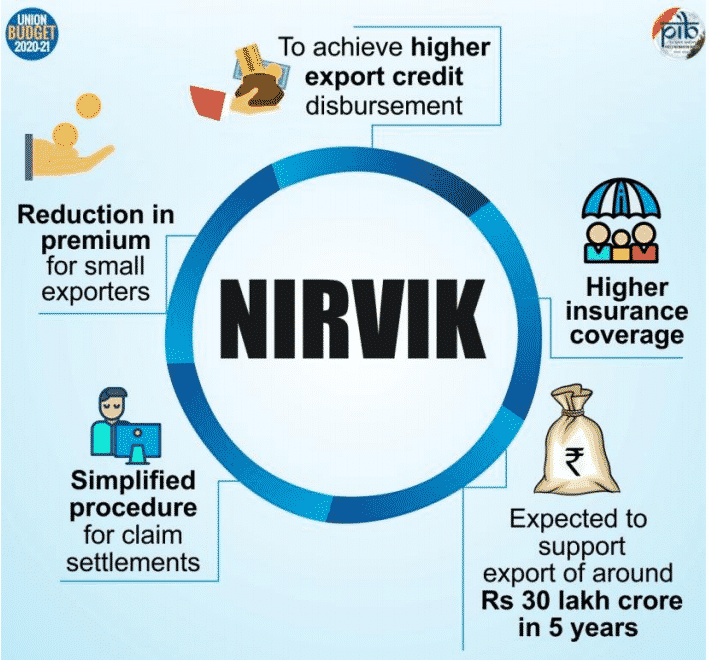 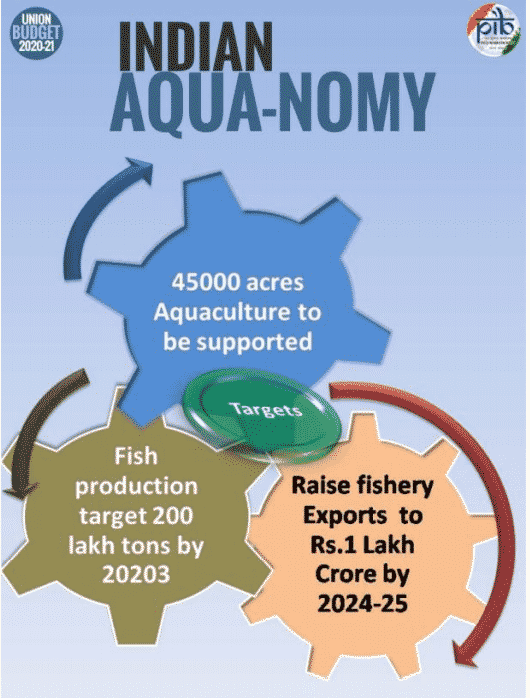