The 2016 BRICS summit is the eighth annual BRICS summit, an international relations conference attended by the heads of country or heads of government of the five member countries Brazil, Russia, India, China and South Africa.

The BRICS Summit 2016 adopted the Goa Declaration which unanimously hit out at the growing threat of terrorism, among other issues. India was the host nation of the 8th Summit and the 9th will be organised by China 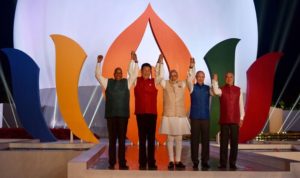 The first ever BRICS-BIMSTEC outreach summit held in Goa under the chairmanship of Indian Prime Minister Narendra Modi.