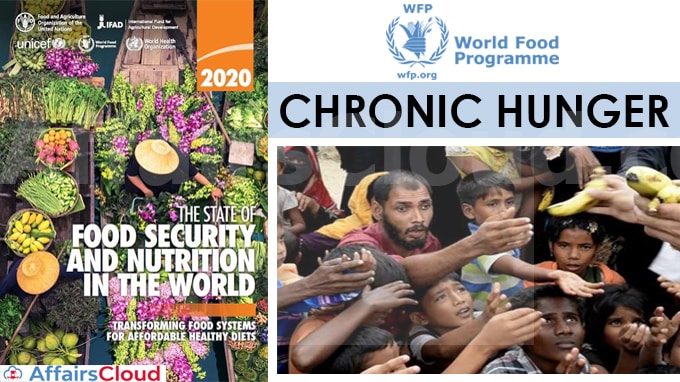 In accordance with the United Nations'(UN) annual report “The state of food security and nutrition in the world- Transforming food systems for affordable healthy diets”, nearly 690 million people, or 8.9% of the world’s population, went hungry in 2019, an increase of 10 million since 2018 and of nearly 60 million since 2014. The report warned that the COVID-19 pandemic may add an additional 83 to 132 million people to the ranks of the undernourished in 2020.

-The report noted that after steadily declining for decades, chronic hunger slowly began to rise in 2014 and continues to do so. As of now, the world is neither progressing towards Sustainable Development Goal (SDG) target 2.1, of ensuring access to safe, nutritious and sufficient food for all people all year round, nor towards target 2.2, of eradicating all forms of malnutrition.

-Asia is home to the greatest number of undernourished people, an estimated 381 million.

-Africa has the most as a percentage of the population with nearly 20% of the continent’s people undernourished.

–3 billion people or more can’t afford to acquire the food needed for a healthy diet.