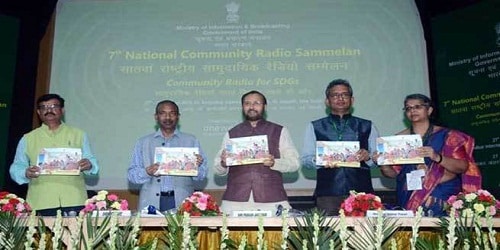 i. Other initiatives: The minister inaugurated a poster exhibition of Community Radio Stations. A short film on the step by step process for setting up of Community Radio Station was also launched on the occasion.
ii. Plenary sessions: The plenary sessions on “The SDG Journey – leaving no one behind” was chaired by Shri Rakesh Ranjan, Senior Consultant, Niti Aayog, and a session on “Community Radio: Issues, Ideas and Experiences” was chaired by Ms. Esther Kar, Former Director General, Press Information Bureau. This session focussed on content management, research, production, broadcasting and dissemination of content through social media.

Shri Prakash Javadekar presented National Awards for Community Radio for 2018 and 2019
Union Minister of Environment, Forest and Climate Change and Minister of Information and Broadcasting Shri Prakash Javadekar presented the National Awards for Community Radio for 2018 and 2019. He also released the booklet “Jan Connect: Clear Intentions, Decisive Actions” on key decisions taken by the Government in the first 75 days of its second tenure. The booklet has been brought out by Bureau of Outreach and Communication, Ministry of Information & Broadcasting.

The Awards for the years 2018 and 2019 were given in the following five categories: