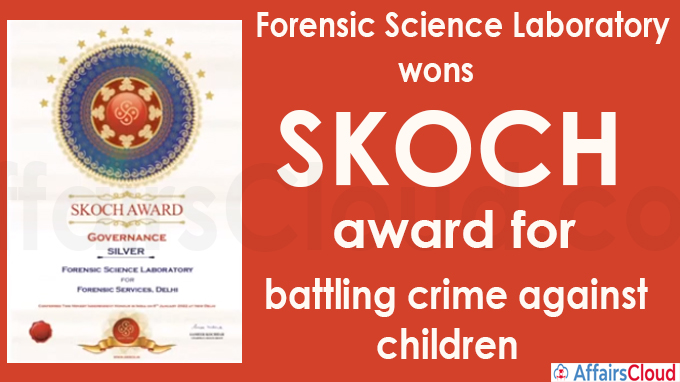 The Forensic Science Laboratory (FSL) – Forensic Service, Delhi, has won the SKOCH Award 2021(Silver) in the Governance category for its work towards combating Crime and Violence against Children.

The award was presented during the 78th SKOCH Summit held on 6th January 2022.

The summit was organised with the theme “State of Governance”.

The SKOCH award, instituted in 2003 is the highest civilian honour in India conferred by an independent organization to recognise the people, projects and institutions that work to build a better India.

The SKOCH Literature Award 2021 was presented to the book titled ‘Rising to the China Challenge: Winning Through Strategic Patience and Flexible Policies’ authored by leading members of Pune International Centre(PIC).

Dr Ajit Ranade, one of the co-authors, and founder members of PIC have received the award at the ceremony held at India Habitat Centre, New Delhi (in December 2021).

Other Awardees of SKOCH Literature Award 2021:

i.Amar Patnaik, Member of Parliament (Rajya Sabha) for the book titled “Institutional Change and Power Asymmetry in the Context of Rural India”.