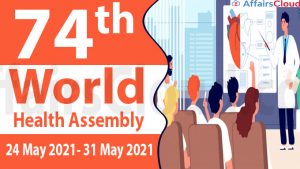 74th session of the World Health Assembly (WHA) of World Health Organization (WHO) held virtually from Geneva, Switzerland amid COVID-19, from 24th May to 31st May 2021.The theme of the 74th WHA is “Ending this pandemic, preventing the next: building together a healthier, safer and fairer world”.

Mrs.Dechen Wangmo, Health Minister of Bhutan has been elected as the President of the 74th WHA.

During 74th WHA, January 30 was unanimously adopted as ‘World Neglected Tropical Diseases (NTD) Day’. The proposal was submitted by the United Arab Emirates (UAE). WHO has devised new road map for 2021–2030 to end NTDs.

NTDs are a group of infections that are most common among marginalised communities in the developing regions of Africa, Asia and the Americas. They are caused by a variety of pathogens such as viruses, bacteria, protozoa and parasitic worms.

Note – 2021 has been designated as the International Year of Health and Care Workers by the WHO.

Union Minister for Health and Family Welfare, Dr Harsh Vardhan Chairman of WHO Executive Board (EB) presented the highlights of the 147th and 148th sessions of the Executive Board and its Special Session on COVID-19 response.

74th WHA adopted a new resolution on Malaria that aims to revitalize and accelerate efforts to end malaria, a preventable and treatable disease that continues to claim more than 400 000 lives annually.

Note – Pedro Alonso, Director of the WHO Global Malaria Programme.

WHA extended the GCM for Non Communicable Diseases until 2030:

i.WHA to develop an implementation roadmap for 2023-2030 in support of the prevention and control of noncommunicable diseases (NCDs).

ii.The roadmap will provide a basis for countries to decide on priority activities and pathways to accelerate progress towards achievement of SDG target 3.4 in the next 10 years.

iii.Target 3.4 of the Sustainable Development Goals is to reduce premature mortality from NCDs by one third by 2030 relative to 2015 levels.