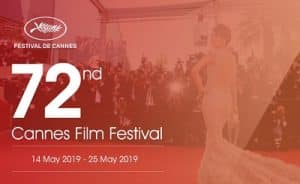 i. Filmmaker of Mexico, Alejandro González Iñárritu served as jury president of Cannes Film Festival 2019.
ii. The Festival honoured the French filmmaker Agnès Varda, by featuring her on the official poster of the festival. She died in March 2019.
iii. South Korean film ‘Parasite’ wins Palme d’Or which is directed by Bong Joon-ho at Cannes Film Festival. He became the first Korean director to win the award.
iv. The opening film of the festival is “The Dead Don’t Die” and the closing film of the festival is “The Specials”
v.The film festival was hosted by Édouard Baer.
vi. The number of films participated were 21 (In Competition), 18 (Un Certain Regard), 11 (Short films).
About Indian Participation:

Awards and their Categories:
i.In Competition:

ii.Ecumenical Prize
Prize of the Ecumenical Jury: A Hidden Life by Terrence Malick

xi.Vulcan Award of the Technical Artist: