On February 27, 2020 6th offshore patrol vessel(OPV) “Yard 45006 VAJRA” was launched to enhance coastal security. Shri Mansukh Laxmanbhai Mandaviya, Minister of State for Shipping(I/C) and  Chemicals & Fertilizers is the Chief Guest of the launching ceremony.The 6th vessel in the series of 7 OPV is designed & developed by  Larsen & Toubro under the Central government’s initiative ‘Make in India’. 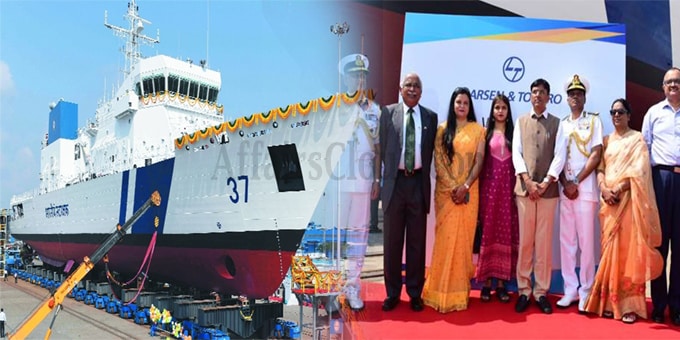 i.It is a state of the art platform which increases the capabilities of Indian Coast Guard in Operation, Surveillance, Search & Rescue.

ii.It is used for day & night surveillance along with anti-terrorist, anti-smuggling operations in the EEZ.

iv.It is 98 metres long & 15 metres wide with gross tonnage of 2,100 tonne. It is equipped with two diesel driven engines & can extend to a maximum speed of 26 knots.

v.The ship will be manned by 121 personnel &  to increase its operational, surveillance, search and rescue capability it will be fitted with CRN-91 & 12.7 mm guns & an integral twin engine helicopter.

vi.It will be inducted by the Coast Guard after extensive trial & testing of equipment & machinery.