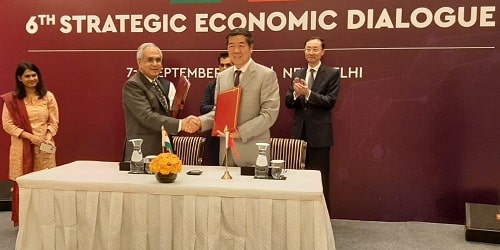 Background of SED:
i. SED formation: Formation of SED was planned by both the Indian and Chinese sides during the Indian visit of the then Chinese Prime Minister Wen Jiabao in December 2010.
ii. SED structure: Niti Aayog and NDRC conducts the dialogue each year alternatively in both the capital of India and China.
iii. First SED: The first SED dialogue was hosted by China at its capital in Beijing on 26 November 2011 and the second SED dialogue was conducted by India in Delhi on 26 November 2012.

Appointees:
Both sides appointed 6 Standing JWG along with co-chairs to address all the economic and commercial issues across various fields of infrastructure, pharma, resources etc.