65 MoUs in the textiles sector were signed on July 1, 2017, the 2nd day of mega textiles trade fair, ‘Textiles India 2017’. These MoUs were signed in presence of Union Textiles Minister Smriti Irani.

MoUs were signed between various domestic and international organizations from industry and government. Of the 65 MoUs, three were Government – to – Government (G2G) MoUs, with Australia, Bangladesh and China. 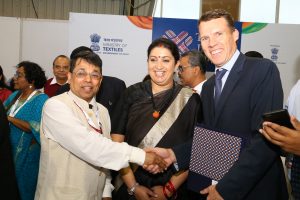 Significance of Textile Industry in India: