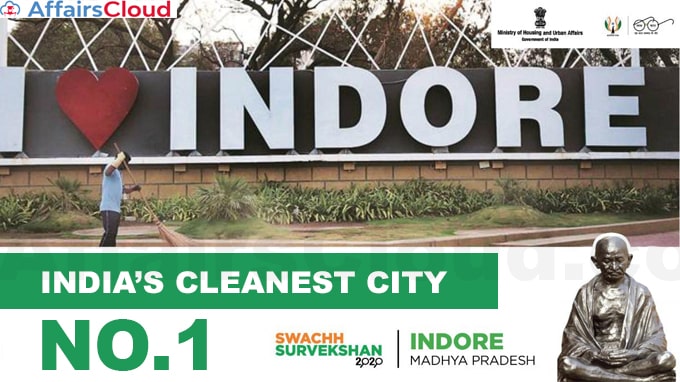 On August 20, 2020, during a virtual event of Swachh Mahotsav organized by, Ministry of Housing and Urban Affairs (MoHUA), Hardeep Singh Puri, Minister of State (MoS)-Independent Charge (I/C) MoHUA announced the 5th edition of the annual cleanliness urban survey of India i.e.”Swachh Survekshan 2020 (SS2020)” conducted by MoHUA.  A total of 129 awards were given by the minister in which Madhya Pradesh’s Indore Creates record as India’s cleanest city for the 4th consecutive time while Gujarat’s Surat and Maharashtra’s Navi Mumbai grabbed 2nd and 3rd positions respectively.

-The cleanliness survey report, along with reports on Swachh Survekshan Innovations and best practices, Swachh Survekshan Social Media Report and Report on Assessment of Ganga Towns were also released at the ‘Swachh Mahotsav’ event.

Launched in 2016 by Prime Minister Narendra Modi its objective was to monitor the performance of Swachh Bharat Abhiyan, which was launched on October 2, 2014, the 150th birth anniversary of Mahatma Gandhi.