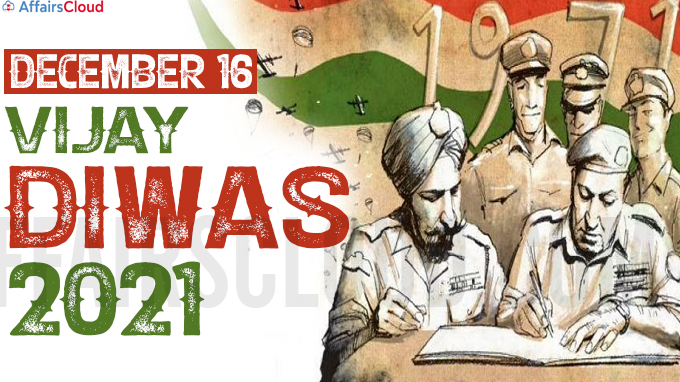 Vijay Diwas is annually observed across India and Bangladesh on December 16th to commemorate the victory of Indian armed forces against Pakistan in the 1971 Indo Pak War, also known as the 1971 Liberation War.

The day also pays homage to the soldiers who sacrificed their lives in the line of duty to the nation.

Bangladesh celebrates the 16th December as ‘Bijoy Dibos’ (Day of Victory) to mark its formal independence from Pakistan.

i.The India Pakistan war of 1971 was the outcome of the liberation war of East Pakistan.

iv.The Eastern Command of the Pakistan military signed the instrument of surrender on 16 December 1971 in Dhaka, East Pakistan (now Bangladesh).

v.The war resulted in the creation of Bangladesh and the signing of the Simla Agreement with Pakistan on Kashmir.

This was the biggest ever military surrender after World War II.

iv.During the closing ceremony, the 4 flames will be merged by PM Modi at the Eternal Flames at the NWM.

Union Defence Minister Rajnath Singh inaugurated the ‘Swarnim Vijay Parv’ which was celebrated on 12th & 13th December 2021 to commemorate 50 years of India’s historic victory in the 1971 war and the Indo-Bangladesh friendship.

As a part of the Vijay Diwas 2021, The Films Division of India also referred to as Films Division, under the Ministry of Information and Broadcasting has screened 4 documentaries (Nine Months to Freedom; Vijay Diwas; Dateline Bangladesh; & India Pakistan Conflict -1971) highlighting the gallantry and achievement of the Indian armed forces.

On the occasion of the 50th Vijay Diwas, General Bhopinder Singh released the book titled ‘War in the East, Liberation of Bangladesh 1971’ authored by Colonel Ranbir Singh VrC(retd) in Chandigarh, in the presence of army veterans who participated in the 1971 war.