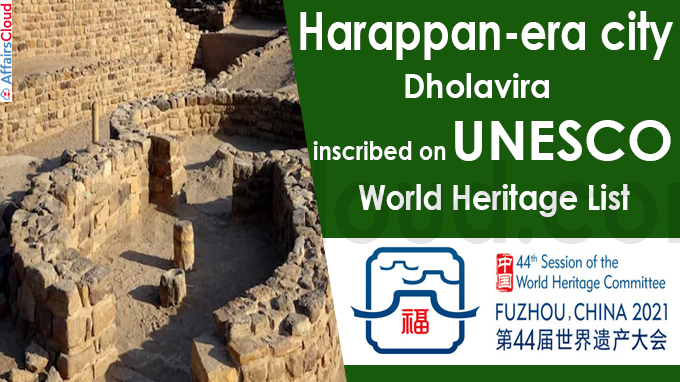 The Extended 44th Session of the World Heritage Committee (WHC) was held in Fuzhou, China from July 16-31, 2021. It was organized by UNESCO (United Nations Educational, Scientific and Cultural Organization) in cooperation with China.

i.From India, 2 sites were added to the World Heritage List. They are

Dholavira (locally known as Kotada timba), which was the Southern Centre of the Harappan Civilization, was added to the list.

i.It is located on Khadir bet island in the Kachchh Desert Wildlife Sanctuary in the Great Rann of Kachchh.

i.Salonga National Park (Congo) was removed from the List of World Heritage in Danger.

December 8, 2020, UNESCO has inscribed the fort cities of Gwalior and Orchha in Madhya Pradesh (MP) in its world heritage cities under urban landscape city programme