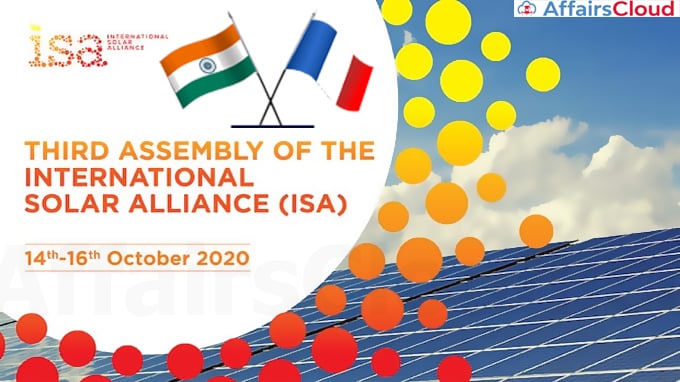 On the lines of the global demand for cooling and heating utilities, the Seventh Programme on Solarizing Heating and Cooling systems was launched by the ISA Secretariat i.e. Gurugram (Haryana).

For the first time ISA Solar Awards were presented which are as follows:

This award was conferred by Mahendra Jain, Additional Chief Secretary to the Government of Karnataka. For Asia Pacific Region it was awarded to Japan while for Europe and other regions it was awarded to The Netherlands.

It was awarded to Arpan Institute (Haryana) and Arushi Society (Madhya Pradesh).

i.Four new Vice-Presidents were also chosen to represent the four regions of ISA. The representatives of Fiji & Nauru for Asia Pacific Region; Mauritius & Niger for Africa Region; UK & Netherlands for Europe and others Region, and Cuba and Guyana for Latin America and Caribbean Region assumed the vice presidency.

ii.Initiatives of the ISA Secretariat in institutionalizing ISA’s engagement with the private and public corporate sector through the Coalition for Sustainable Climate Action (CSCA). Ten public sector organisations in India presented a cheque for 1 million USD each at the assembly.

iii.France has also supported the collaboration with the World Bank to mobilise financing: a facility “Sustainable Renewables Risk Mitigation Initiative” (SRMI) should help mobilize 18 billion € in private investment to finance more than 10 gigawatts of solar projects, and a first project is being launched in Mozambique with the support of France and the European Union.

i.On September 8, 2020, the first World Solar Technology Summit (WSTS) was held virtually which was organized by the International Solar Alliance (ISA) along with Federation of Indian Chambers of Commerce and Industry (FICCI), as the convenor of ISA Global Leadership Task Force on Innovation, to focus on new Technologies and Innovations in the field of Solar.

In November 2015, ISA was jointly launched by India and France during the 21st session of the United Nations Climate Change Conference of the Parties (COP-21) in Paris, France to promote solar energy among its Member Countries. The major objective of the organization is the deployment of 1000 GW of solar capacity and mobilization of US$ 1000 billion of investment in the solar energy sector by 2030.