The 39th Jamnalal Bajaj Foundation Award was awarded on 7 November 2016 in Mumbai, Maharastra.This year, the receivers of the award were Mohan Hirabai Hiralal and BonBehari Vishnu Nimbkar from Maharashtra, Dr. Nannapaneni Manga Devi from Andhra Pradesh and Sheikh Rached Ghannouchi from Tunisia.

The award is presented every year in honor of the birth anniversary of Shri Jamnalal Bajaj. The Award comprise of a Citation, a Trophy and a prize amount of Rs. 10, 00,000 in each category. 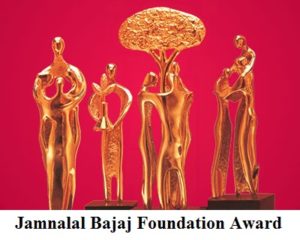