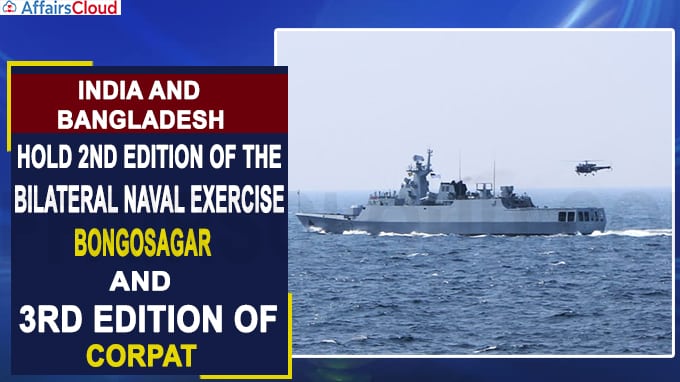 On October 3, 2020, the 2nd edition of Indian Navy (IN) – Bangladesh Navy (BN) Bilateral Exercise Bongosagar was held in Northern Bay of Bengal which was followed by 3rd edition of IN – BN Coordinated Patrol (CORPAT) from 4 to 5 October 2020 at the same venue.

While the aim of Exercise Bongosagar is developing inter-operability and joint operational skills through a conduct of a wide spectrum of maritime exercises and operations, on the other hand CORPAT is for strengthened understanding between both the navies and instituted measures to stop conduct of unlawful activities.

During the CORPAT exercise, both navies will undertake joint patrolling along the International Maritime Boundary Line (IMBL).

i.In July, 2020, the Indian Navy carried out a military exercise with a United States (US) Navy carrier strike group led by the nuclear-powered aircraft carrier USS Nimitz off the coast of Andaman and Nicobar Islands. The USS (United States Ship) Nimitz is the world’s largest warship. Click Here to Read.