The 28th session of BASIC (Brazil, South Africa, India, and China) Ministerial meeting 2019 on Climate Change was held in Sao Paulo, Brazil from 14 – 16  August 2019. Union Minister of Environment, Forest and Climate Change, Shri Prakash Javadekar represented India for this meeting. This comes ahead of United Nations Framework for Climate Change (UNFCC) Conference of Parties (COP-25) meet scheduled to be held in Santiago, Chile from 2 – 13 December 2019. 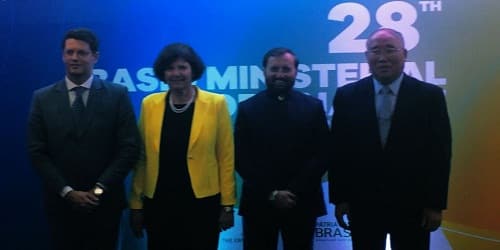 Highlights of the 28th BASIC Ministerial Meeting:
i.  Javadekar’s statement: While addressing the meeting, Mr. Prakash Javadekar stated that the BASIC Group coming & putting views together is an important aspect of the UN (United Nations)negotiations.
The group has one-third of world’s geographical area and nearly 40% of the world’s population, can play a crucial role in ensuring that all countries accept the Paris climate agreement.
Furthermore, he stated that BASIC will be united and will speak in one voice.
ii. Affirmation:  The group reaffirmed member countries’ constructive engagements and significant contributions to implement UNFCC, its instruments, Kyoto Protocol, Paris Agreement and further the process under the UNFCCC(United Nations Framework Convention on Climate Change). These actions will promote low carbon transition, tackle climate change (including in the urban environment) to safeguard the future of mankind.
iii. NDC: The Ministers highlighted the development of pre-2020 and achievement of their Nationally Determined Contributions (NDCs), even the multiple challenges like social and economic development and poverty eradication they face. They adopted to share the best practices and support each other through south-south cooperation as they can further promote their domestic climate policies and actions.
iv. Climate action:  The group highlights the global climate action that should promote climate justice by recognition of the fundamental right of all people in accessing economic growth and sustainable development.
v. Order: Ministers took note of the combined report on pre-2020 implementation and ambition published by the UNFCCC Secretariat in the year 2018 & underlined the significant gaps (such as mitigation, adaptation, and support ) in climate efforts. The group also emphasized that those gaps should not affect the developing countries in the post-2020 period and urged the countries to meet their commitment means of implementation of climate finance, technology development including in the pre-2020 period.
vi. Appreciation:  Ministers welcomed the 184 ratifications, till date, of the Paris Agreement, adopted under the UNFCCC & 130 ratifications, to date, of the Doha Amendment to the Kyoto Protocol. They called on the remaining Parties to join the Paris Agreement & made ratification Doha Amendment as soon as possible.
vii. Polish Presidency: Ministers appreciated the contribution of Polish Presidency to the UNFCCC process, particularly the decisions adopted in Katowice, during Conference of parties COP 24, CMP 14 and CMA 1, including Paris Agreement Work Programme. The group given its support to the incoming Chilean Presidency of COP 25 and emphasized the importance of reaching solid results in Santiago, which is a crucial opportunity for closing the action and ambition gaps before 2020.
viii. PAWP: The group reiterated their commitment to work together with all parties in an open, transparent, inclusive and party-driven manner to achieve a balanced and comprehensive outcome on all remaining items of the Paris Agreement Work Programme(PAWP).
ix. UNSG  Climate Action Summit: Ministers praised UN Secretary General’s efforts for UNSG´s Climate Action Summit, which will be held on September 2019 with the aim to build political momentum for enhancing climate action and support. They also reaffirmed their support for this summit.
x. Threat:  They took notes of Special reports of Intergovernmental Panel on Climate Change (IPCC)findings on global warming of 1.5 °C and report on Climate Change and Land, which highlights the high vulnerability of developing countries on the account of climate change effects, costs of adaptation and requirement of transitions in the development process.
xi. Call to action:  Ministers asked developed countries to help developing countries in order to achieve their climate goals by providing the adequate provision of timely finance support ($ 100 billion annually by 2020), technology transfer, and capacity building. The support should be new and additional, and over and above their 0.7% of GNP (Gross national product )commitment with respect to Official Development Assistance (ODA). This will create crucial signals to investors, both public and private, in order to match the urgency of climate change. The group also urged developed country Parties to provide funding for loss and damage arising from climate change in developing countries.
xii. Transparency framework: They highlights the enhanced transparency framework established by the Paris Agreement to facilitate the exchange of information, best practices, as well as address the needs faced by developing countries.
xiii. Cause for concern: Ministers worried about the denial of rights to support the Green Climate Fund (GCF) and the Global Environment Facility (GEF) by developing countries. They raised their expectation that 1st replenishment of the GCF by the end of 2019 will ensure the financial contributions by developed countries match the ambition, needs, and priorities of developing countries.
xiv. Article 6 of the Paris Agreement: It aims at promoting integrated, holistic & balanced approaches that will assist governments in implementing their NDCs through voluntary international cooperation.
The group highlights the Article 6 issues of the Paris Agreement. It will assist participating members to implement the Paris Agreement efficiently.
xv. BASIC Ministers noted the International Maritime Organization (IMO) and International Civil Aviation (ICAO) work on reduction of carbon emissions and underscored that work being undertaken by them must complement the UNFCCC. They affirmed their commitment to support the State of Palestine, as the Chair of the Group of 77 and China, with a view to strengthening the unity and advancing the common interests of developing countries.
xvi. Next meet: China will host the 29th BASIC Ministerial Meeting in 2020.
BASIC countries:
These are bloc (geopolitical alliance) of 4 large newly industrialized countries (Brazil, South Africa, India, and China).
i. It was formed by agreement in November 2009. They were committed to act jointly at Copenhagen climate summit 2009, including possible united walk-out if their common minimum position was not met by developed nations during climate talks.
ii. It is working to define common position on emission reductions and climate aid money and try to convince other countries to sign up to the Copenhagen Accord.