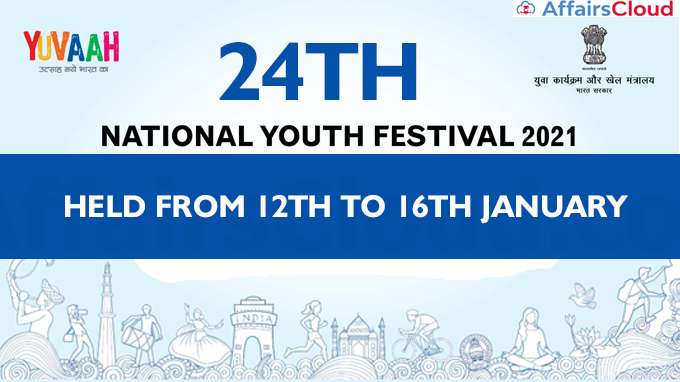 The 24th National Youth Festival (NYF) 2021 was held from 12th to 16th January, 2021. Its closing ceremony was addressed by Union Minister of Textiles and Women and Child Development Smriti Zubin Irani in New Delhi in the presence of Union Minister of State (I/C) for Youth Affairs and Sports Kiren Rijiju.

It is organized by the Ministry of Youth Affairs and Sports, Government of India in collaboration with one of the State Governments. But this year it has been organised in virtual mode for the first time due to covid-19 pandemic, without any anchor state.

23rd National Youth Festival 2020 was organized by Ministry of Youth Affairs and Sports and State Government of Uttar Pradesh with the theme ‘FIT YOUTH FIT INDIA’.

To propagate the concept of national integration, spirit of communal harmony, brotherhood, courage and adventure amongst the youth by exhibiting their cultural prowess in a common platform.

—Ministry of Youth Affairs is going to launch a big programme on National Girl Child Day on Beti Bachao Beti Padhao in collaboration with Ministry of Women and Child Development.

The 2nd National Youth Parliament Festival was organized as a part of NYF. Its valedictory function was addressed by Prime Minister Narendra Modi via video conferencing.

ii.On 1st December, 2020 Nagaland started celebrating the 21st edition of Hornbill festival 2020 from 1st-5th of December organised virtually for the first time due to the pandemic.