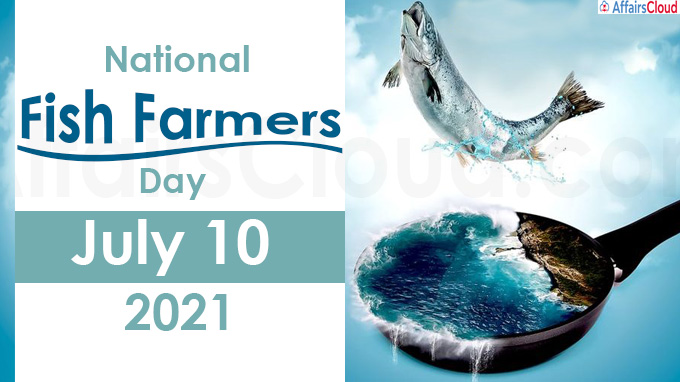 The National Fish Farmers Day is annually observed across India on 10th July in memory of the Scientists – Dr K. H. Alikunhi and Dr Hiralal Chaudhuri – who successfully demonstrated the induced breeding in Indian Major Carps on 10th July 1957.

The day also recognises the contribution and the efforts of fish farmers in producing the fish to meet the needs of the people.

i.In 2001, the Government of India declared that the 10th July of every year will be observed as the National Fish Farmers’ Day” starting from 2001.

ii.The first success in induced breeding was achieved at Angul in Odisha on 10th July 1957.

ii.Fish farmers, aqua-preneurs & fisher folks, professionals, officials and scientists from across India participated in the event.

ii.The ministers have also interacted with the beneficiaries of the Pradhan Mantri Matsya Sampada Yojana (PMMSY) and NFDB schemes from across India.

i.The Pradhan Mantri Matsya Sampada Yojana (PMMSY) is a flagship scheme launched in September 2020 for focused and sustainable development of the fisheries sector in India with an estimated investment of Rs. 20,050 crores for its implementation.

About National Fisheries Development Board (NFDB):