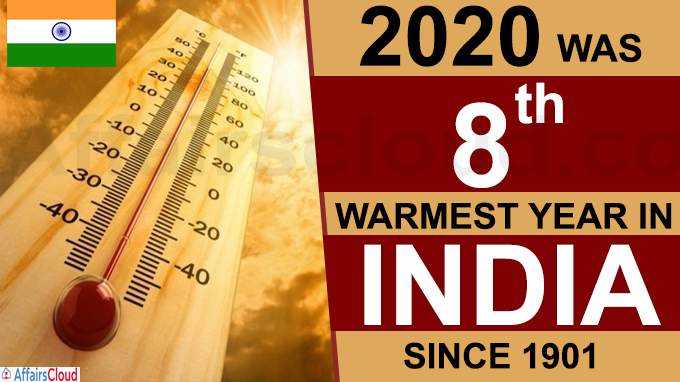 The ‘Statement on Climate of India during 2020’ issued by Climate Research and Services (CRS) of India Meteorological Department (IMD), Ministry of Earth Sciences, Government of India mentioned that 2020 was the 8th warmest year in India since nation-wide records commenced in 1901.

i.But, this is substantially low than the highest warming observed over India during 2016 (+0.71⁰C)

As per ‘The State of the Global Climate 2020’ released by World Meteorological Organisation(WMO), the global mean surface temperature during January to October, 2020 was +1.2⁰C

Highlights of the Statement:

During 2020, Bihar & Uttar Pradesh were the most adversely affected states which reported over 350 deaths from each state mainly due to thunderstorm, lightning & cold wave events.

During pre-monsoon, monsoon & post-monsoon seasons, more than 600 deaths were reported from different parts of the country were mainly due to Heavy rainfall & flood related incidents

As per the United in Science 2020 report, the second in a series highlighted that the world is nearing to pass the temperature limit set by global leaders 5 years ago and may exceed it in the next decade or so. In the next 5 year, the world has about a 1-in-4 chance to experience a year that is hot enough to keep the global temperature at